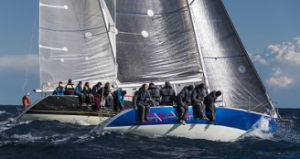 RSGYC Member Nigel Biggs and his crew fly the flag for the RSGYC in Monaco. Thank you Nigel for the following report:

At the end of the season, the following years sailing always seems such a long time away.  To brighten up our winter, we decided to take our recently re-fitted half tonner “Checkmate XV” on a little journey.  The unanimous choice of destination following a brief discussion between all the crew was Monaco for the Primo Cup.  This event has many fond memories as we have all competed there a number of times and whilst the weather can be uncertain the warmth of welcome and hospitality cannot.  In a mixed IRC fleet, we weren’t expecting to be competitive but we felt a few days on the water would be time well spent, learning about the boat and how to sail her.

“Checkmate XV” left the sanctuary of her shed at the GBR Challenge Yard in Cowes on a Sunday afternoon for the road journey through France.  Although delayed slightly by bad weather, she arrived safely in Monaco and was launched on the Wednesday by the extremely helpful staff from Yacht Club de Monaco, under the supervision of Matt, enjoying his first trip to the Principality.  With the rig in and the engine fired up, the old girl was ready for the rest of the crew to arrive which we duly did on Wednesday evening.

Thursday morning brought a cold breeze as we worked our way through our job list, the bright sunshine reminding us just why we had travelled so far in the middle of winter.  It is so much easier working on any boat in the sunshine and with everyone dealing with their own tasks we made great progress.  After lunch we ventured out for our first sail of the year and went through our full sail inventory in a dying breeze.

Back ashore, our 28-year-old half tonne, Checkmate XV, looked very small compared to the other IRC boats moored nearby, particularly the Martin 49 which we found was also in our class!  Undeterred, we followed in the tradition of all Royal St George crews by making the most of Happy Hour in the Yacht Club and planning our adventure for the evening ahead…

Racing began on Friday morning in a 10-12 knot breeze.  Being the smallest boat in our class, starting was always going to be interesting but we somehow managed to find a gap near the pin end and popped out nicely.  A long windward leeward course had been set with the first leg being almost 2.5 miles. The breeze was shifty and we worked hard trying to play the shifts and stay in clear air, eventually rounding the first mark third, with only the Martin 49 and GS44 ahead.  We had expected to be sailing around on our own at the back of the fleet and it was a great surprise to find that wasn’t the case.  In the shifty conditions there were more snakes than ladders on the race course and we were relieved to finish with boats still behind us.

Race 2 began in similar conditions and again we managed to find a way out of the start.  Part way through the breeze became more fickle and at one point we found ourselves square running to what should have been the windward mark!  The breeze finally settled back to its original bearing before the weather gods had the final laugh with a 25 knot mistral rolling down the cliffs to give a cold and lively end to the race.  As we motored back into Port Hercules with flurries of snow in the air, it felt just like home!

We didn’t have any idea how we had done in either of the days 2 races, with such a spread of ratings and such changeable conditions it simply wasn’t possible to get the finishing time of other boats.  However, the reason for going to Monaco was to spend some time in the boat and we had certainly achieved that objective.  So we settled into the comfortable white leather sofa’s in the Yacht Club de Monaco and enjoyed another “Happy Hour”, with our now almost trained, waiter bringing regular top-ups.  As the evening became more blurred we discovered we had, somehow, won both of the days races although by this time, no-one really cared…

Saturday morning began pretty much the same way as Friday: with hangovers and comments of “Never Again”!  Thankfully the breeze was non-existent and we began to recover as we worked through our updated job list whilst we sat in the harbour under AP.  A successfully executed float test of the iPad suggested we were feeling back to normal as we left for the race course with the breeze beginning to appear.  Clearly the feeling of normality was false as we (I) proceeded to luff a particularly large boat over the startline, or at least what we thought was the startline, only to find I was looking at the wrong mark and we were about 3 boat lengths over ourselves!  As we bore away to return to the correct side of the correct line I was rather glad that I couldn’t understand what the French crew were shouting at me, somehow the embarrassed wave of my hand seemed rather inadequate.

After a start like that, we didn’t deserve to get anything out of the race but we soon settled down and began picking boats off, eventually finishing what turned out to be 4th on corrected time.  The breeze finally made a proper appearance for the second race of the day which was started in a steady 12-15 knots.  This wasn’t to last though as the snakes and ladders nature of Mediterranean sailing returned and we found ourselves going through most of our sail inventory to keep the boat powered up in the changing conditions.  As we finished just off the breakwater we had no idea how we had done but were very pleased to have finished mid-fleet again beating a number of higher rating boats along the way.

Saturday evening at the Primo Cup is traditionally “Crew Party” night and this year was no exception.  The members and staff of Yacht Club de Monaco are fantastic hosts, how many other event organisers provide you and your guests with free food and drink for the evening?  After enjoying the clubs hospitality, we returned to our hotel to shower and change before further exploring what the Principality had to offer at night time.  Casino Square is always worth a visit to admire the supercars parked side by side, somehow this glamour is what Monaco is all about.  The Hotel de Paris is well known for featuring in many a James Bond film so seemed like a reasonable place for a group of sailors to relax and have a drink.  In true Monaco style, we were made extremely welcome and enjoyed a couple of bottles of Cristal in the stunning surroundings of this magnificent hotel before completely our track walk on the way back to bed.

Going into the final days racing, we were tied on points at the top of the IRC fleet with Eleuthera a Grand Soleil 44 skippered by Marc Pajot, our new “best friend”, both boats with 1,1,2,4 scorelines.  Much thought had been given to how we could approach the days races, knowing we had to beat Marc in at least one race to win the event.  The previous evenings alcohol was still clearly affecting our judgement when we decided our best approach was to try to match race the multiple America’s Cup challenging skipper out of the start in our half tonner, because of course he wouldn’t be expecting that!  We still don’t know whether this was the correct decision as the weather gods decided not to play ball, keeping the breeze below levels that would have made racing possible, the race committee sensibly keeping the fleet ashore.  Who knows what might have been…

The final results gave the class win to Eleuthera on count back but we were delighted to be on the podium for our first event of 2013, quite contrary to our expectations beforehand.  We had exceeded all our objectives over the course of the 4 days, made excellent progress with our job list and learnt a huge amount about sailing the boat.  More importantly than any of that though we all had a fantastic time, making new friends and thoroughly enjoying our visit to Monaco.  We will certainly be returning to the 2014 Primo Cup and would recommend the event to anyone as one you must attend at some time in your sailing career.

In the meantime, Checkmate XV is continuing her European adventure and is currently in storage near St Tropez where she will stay until the SNIM regatta in Marseille at Easter.  It’s a hard life being an old boat!