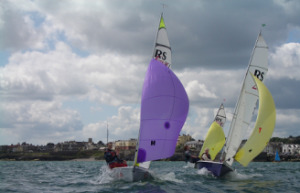 The RS Feva Association have confirmed they will join the RS200 & RS400 fleets on the 2013 Irish RS Circuit.

An unofficial ‘RS Pathway’, has in recent years helped retain Greystones youth sailors and come to embody the ISA ‘sailing for life’ motto. Sailors from 5 to 55 years, of all skill levels across the 3 RS fleets are on the start line together for Club racing. Those at the ‘more experienced’ end of the fleet hope to emulate the example of Liam Donnelly (RNIYC), who in his sixties, is snapping at the transom of young Olympians and currently lies third in the competitive Ballyholme Icebreaker series.

This experience has prompted the RS200/400 and RS Feva Associations to come together for the RS Circuit. First gun will be at the Royal St George Yacht Club at the end of April and will continue throughout the season up and down the country concluding in Lough Ree in October.

The Irish RS200/400/& Feva National Championships will be hosted by the Royal North of Ireland Yacht Club, a Club already enjoying the bigger RS boats yet new to the Feva. RNIYC, like other Clubs in the North and around the country, are looking for a doublehander alternative to the ISA/RYA Pathways to keep kids sailing. As the RSFevas make inroads up North, we hope to see Ballyholme, North Down, Royal North and County Antrim Clubs being represented for the first time alongside the more seasoned Feva clubs up and down the country.

This Championship event will be the focal point of the first half of the Traveller Series for all 3 RS fleets in Ireland, boosted by a dramatic 10 new RS400 teams across Northern Ireland over the winter, including Irish Olympic 49er team Ryan Seaton and Matthew McGovern. The Olympic duo have taken the racing up to another level at the Ballyholme Icebreakers (when the weather allows!!) but already the fleet is responding, and Ryan and Matty are not having things all their own way.

10 Scottish teams are booked to come over using Stena Line’s helpful sponsorship discount, and several teams from the South of England and Midlands are also planning to attend. This could see a fleet of 35+ RS400s racing over three days of July 5-7.

Recent deliveries of 200s to Dun Laoghaire and a couple more due in Greystones will strengthen the Irish 200 class during 2013.  Those who have trained or sailed through the winter in the DMYC Frostbites and Ballyhome Icebreakers will surely benefit from an early Nationals date. Greater challenges still are expected from the competitive UK visitors, as this event, with another in Carnac, forms the RS Eurocup for the RS200 and RS400.  Dun Laoghaire Regatta also welcomes RS200/400 entries the following week. The second half of the season should prove interesting, with a battle on the seas for the Traveller Trophies across the three fleets.

Clubs and classes will be holding Coaching Clinics and Try Out sessions over the season. We look forward to more sailors enjoying the one design experience of the Irish RS Family with crews of all generations and genders racing together. Boat design allows seamless transition and progression up the fleets as skills develop. Owners are thrilled with boats that remain competitive over many years so it is boat handling, tactics and team work that win out every time.

Visit our websites, which display the Irish RS Family Circuit, Irish National Championships Notice of Race, other events further afield and details of coaching clinics and Try Out sessions as they emerge.