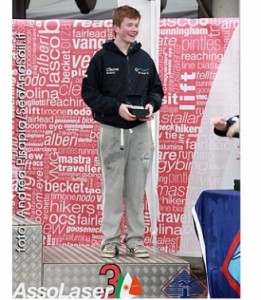 The Europa Cup in Malcasine on Lake Garda saw 560 laser sailors take to the water over three of the four planned days for the event. From freezing cold with 40 knot gusts on Day 1 to 8-15 knots and shifty with cold sunshine on other days the event lived up to its challenging billing. All six George sailors learned enormously from the event. The sheer scale and competitiveness of the fleets gave our sailors the sort of international competition they were looking for clocked up steady performances. To put the event in context, at one end some sailors were taken off the water with hypothermia while at the other end, Robert Scheidt triple Olympic Gold Medal winner, took the title in the Laser Standard fleet.

The Irish were in evidence in the Men’s Radial fleet with the ISA Academy sailors taking 1st, 2nd, 4th , 8th , 15th  and 18th – a truly impressive performance.

Not to be outdone, our own Conor O’Beirne celebrated his 15th birthday on Day 3 by taking third place in race 1 and then winning race 2, only to discover he had collected a black flag for his first race! Such is dinghy racing. However, he had done enough over the course of the series to get the George onto the podium and taking 3rd place in the U16 Laser 4.7 fleet.

Well done to Conor, Chloe, Mark, Nathaniel, Conor, and Jack for flying the Royal St George flag on foreign waters. We look forward to seeing them and the rest of the Team George laser sailors in action at the upcoming Munsters and ISA Youth National next month.