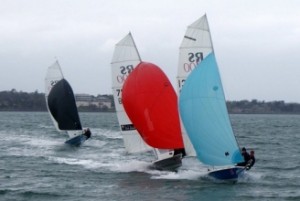 The three RS classes battled it out this weekend at the Seapoint end of Dublin Bay for the season’s first event, the Eastern Championships. The event attracted a total entry of thirty five boats with nineteen RS400’s, eleven RS200’s and six Feva’s.

Race Officer Barry Mac Neaney, assisted by Jimmy Murphy and his crew on the committee boat “Lady Beag” from Poolbeg Yacht Club, did a fantastic job to promptly fire off four races on Saturday in shifty and testing conditions with strong tides added in for good measure. The final two races were sailed in stronger gusty conditions on Sunday, which proved a stern but exciting test for all crews.

In the RS400 class, there was a three-way tussle at the top between Bob Espey & Michael Gunning of Ballyholme YC/Royal Ulster YC, Emmet & James Ryan of The Royal St George YC and Mike “Chunky” Ferguson & Jeremy Tomalin of Ballyholme YC/Royal Ulster YC. The three boats appeared to be tied together by a piece of string for much of Saturday’s four races with only a two point gap separating first and third overnight.

In Sunday’s first race for the 400’s a slight miscount of laps by the majority of the fleet left the top two of Bob Espey/Michael Gunning and Emmet/James Ryan to fight it out in a match race which left both on equal points for the final race. Bob and Mike took the final race in strengthening wind conditions and with it the RS400 Easterns.

In the RS200’s, it was local class newcomers Conor Totterdell & Myles Kelly who topped the fleet taking both the overall and junior trophies. This was a great achievement in a range of trying conditions. Conor & Myles are sure to be a force to be reckoned with this season, particularly with the Dún Laoghaire RS fleet growing in numbers and talent. Second in the RS200’s was Newcastle YC’s Clive Coffey & Helen Cassidy. The 2012 Traveller Series Champions from Newcastle once again proved ever consistent performers over the weekend. In third place and taking over the helm form his Dad Sean for the first time was Stephen Craig and his crew Conor Foley. Stephen & Conor had an unfortunate last race which in the end cost them the event. No doubt they will be back fighting for the top spot at the next RS event in Greystones on the 22nd of June.

The Feva class benefitted from on the water coaching throughout the event and this definitely helped to iron out any early season creases by the end of the six races. Jack & Henry Higgins grew massively in confidence over the series and counted three bullets from the last three races. Emmer Rafferty & Laura Coleman gave the Higgins brothers a great run for their money and finished just one point off top spot. Dara Donnelly & Rosemary Tyrrell put in a very solid six races to finish up in third place.