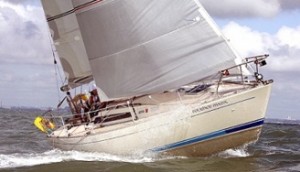 The Volvo Dun Laoghaire Regatta is running a coastal series as part of the fifth edition of the combined Club’s event and judging by entries to date (see below) there it looks like the initiative is getting a good response.

Entry in the class this year is expected to reach approximately 15 boats with the list of entries to date below.

Some say organisers are on the right tack with the new coastal course and may have in fact underestimated demand from crews looking for a change of scene.

There are plenty of standard cruiser designs not suited to prevailing tight inshore courses and who cannot compete on handicap with some of the out and out racing machines. Instead this coastal series will accommodate those larger cruisers who prefer to take part in races where the distances between marks are greater.

Already DBSC regular Lively Lady, a Beneteau 44.7 is signed up as well as the Nicholson 58 Rebellion. Smaller boats are also involved including Lulabelle, the Beneteau 36.7.

It is hoped that this will attract the increasing number of boats that are opting to race offshore as evidenced in part by the work of Peter Ryan running a 20-boat ISORA fleet from the National Yacht Club.

The courses for the VDLR series will take place outside of the Burford Bank and in an area north of the “Bray Outfall” buoy and south of the “North” Howth Yacht Club race mark.

The courses will be set on the day of the July race and will reflect the conditions prevailing at that time, boats will race one long race per day.

Ashore the plan is those taking part in the Coastal Series will be able to enjoy the fantastic social scene around Dun Laoghaire as much as their inshore competitors as the race duration and time limits will get all boats back at the same time as the inshore fleets.

Thank you to our friends at Afloat.ie for the above article and David O’ Brien for the photo.