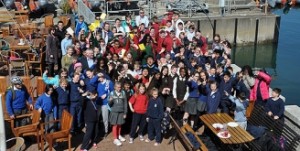 The Sailing in the Community Programme is a five-year initiative by the Royal St George Yacht Club and Dun Laoghaire-Rathdown County Council to introduce primary school children to the sport. The aim being to teach children from the schools participating in the Dun Laoghaire-Rathdown After schools Fun Through Sports (DRAFTS) programme how to sail.

The purpose is to create a culture of sport and active recreation through sailing and foster a continued interest in the sport.

The course was run from the Royal St George Yacht Club who partnered with the Irish National Sailing School to provide the participants with quality coaching, facilities and equipment. During the pilot scheme participants attended five weeks of coaching.

As part of the initiative twelve of the participants were awarded scholarships to the Royal St George Yacht Club Junior Sailing Courses this summer.

Speaking at the presentation of the awards Mr. Richard Shakespeare “congratulated all the participants on their achievements and welcomed the support of the schools and teachers for the DRAFTS program. The project he said has been a great success; he was very pleased to be partnering with the Royal St George in this important initiative for the county and thanked all those involved in the organisation.”

Thank you to our friends at Afloat.ie for this report.