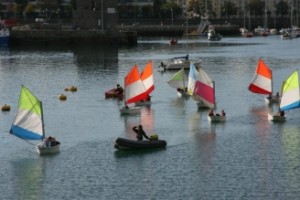 Pre-Ulsters coaching was focused on speed off the line, decision making upwind and downwind and boat handling around the course, especially leeward mark roundings.

Great weekend had by all the sailors and families at the Royal North Yacht Club. Some huge improvements were seen in our Oppie Sailors, particularly in the Junior Fleet with Tom Higgins winning Junior Silver overall, Sarah Fogarty in Third, honorary mention for Triona Hinkson who won her first race in Junior Silver.

In Junior Gold, Morgan Lyttle pushed hard to claim a 7th overall, with 2 second place finishes along the way, in what was an extremely shifty affair.

In the Senior Fleet, Henry Higgins, Toby Hudson Fowler and Grace O Beirne all had their ups and downs over the two days, the strong tidal and shifty conditions combined with a very tough level of competition meant podium positions were just out of reach. However what did show was that the sailors certainly have the boat speed and handling to mix it at the front of the fleet.

Luka Flannigan, Tomm Simms, Kitty Flannagan, and Oscar Lubliner also made the trek north to compete in the Regatta Fleet at the event. Under the IODAI Coaches, they progressed well over the two days and greatly enjoyed the regatta experience.

The weekend was rounded off with a trip home in the Hinksons Caravan for most of the team. It was great to see the sailors enjoying the regatta atmosphere and doing so well throughout the event.