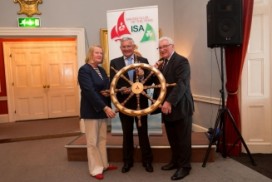 The Royal St. George Yacht Club is delighted to be the 2013 recipient of the Mitsubishi Motors / ISA Sailing Club of the Year.

The presentation of the famous Ship’s Wheel Trophy was made by Frank A. Keane, Chairman of Mitsubishi Motors Ireland and Niamh McCutcheon, President of the ISA (Irish Sailing Association) to the Commodore, Liam O’Rourke in the Club on 3 July.

Speaking at the Royal St. George, Frank Keane said, “Mitsubishi vehicles are often found in sailing surrounds, pulling boats of all shapes and sizes around the Country. So we have a great affinity with the sport and are delighted to be able to support it through our sponsorship of this award.”

Niamh McCutcheon praised both Mitsubishi Motors for their support of Irish sailing and the Royal St George Yacht Club on their accolade “The Royal St George is truly deserving of this award for the magnificent job its committee, Members and staff did in hosting the ISAF Youth Worlds last summer. The Club, along with the assistance of all the waterfront clubs, ran a regatta described at the closing ceremony by ISAF’s Fiona Kidd as truly the best ISAF Youth World Sailing Championship that she had ever attended”.

Upon receiving the Ship’s Wheel, Commodore O’Rourke said, “I am honoured to accept this distinguished award on behalf of the Club surrounded by Members and friends of the Royal St. George.”

To mark this achievement Members and guests of the Club gathered to celebrate the award which recognised an outstanding 12 months of success including the co-hosting of the ISAF Youth Sailing World Championships last summer; an event that welcomed 350 sailors aged 14-19 years old from 63 nations, plus their coaches and team leaders to Dun Laoghaire for a week of world class competition and festivities.

The Royal St. George Yacht Club, which is celebrating its 175th Anniversary this year, last won this award in 2010. This award was devised in 1979 to encourage and recognise the efforts of sailing clubs and associations nationwide.