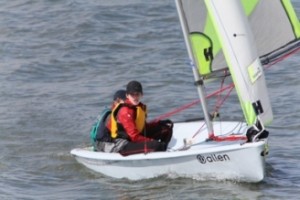 The 2013 RS Feva, RS 200 and RS 400 Nationals, sponsored by Stena Line, took place in glorious sunshine and good winds in the Royal North of Ireland Yacht Club (RNIYC), Cultra, Co. Down from the 5th – 7th July. The exceptional weather and very warm welcome from the members of RNIYC ensured that a most memorable weekend of sailing, fun and socialising was had by the Team George contingent of over 35 sailors and parents.

Niamh Hinkson arrived early on Thursday evening and requisitioned the prime location for her camper with uninterrupted views out over Belfast Lough.  However Heather Craig arrived 10 minutes later and Niamh’s views were somehow suddenly exceeded by the view from the new arrival’s camper!  However, this did not affect Niamh’s ability to refuel George competitors as they came off the water with sausages and other bounty and kept parents’ caffeine levels topped up – thank you Niamh!

Parents and competitors stayed in a variety of accommodation including the Rockport School dorms where the fog horn sleeping habits of Marc Little and Richard Tate ensured a good night’s sleep for those in residence .

The sailing highlight of the weekend was Jack and Henry Higgins winning the Jack Craig Memorial Trophy and ISA gold medals for overall first place in the RS Feva National Championships.  Jack and Herny sailed exceptionally well over the three days and in the final race of the series secured a second place to seal a great victory.

In the RS 200 fleet of over 20 boats Stephen Craig and Conor Foley led the charge for Team George finishing in 5th position overall and taking first place in the U19 category.  Graeme Noonan of Greystones Sailing Club and his crew Heather Craig; Conor Totterdell and Myles Kelly; Rosanna Cassidy and Maeve Rafferty; and Clodagh and Adrian Hinkson contributed to the strengthening participation of the RSGYC in the exciting RS 200 class.

There was a huge entry in the RS 400 class with over 40 boats participating.  Emmet and James Ryan had an excellent Championships finishing in 8th position and winning the ISA bronze medal in a very competitive fleet.  Richard Tate and Jimmy Foley expended not an ounce more energy than was required by managing to perfect their arrival to the starting line with just five minutes to the starting gun.

Finally, a huge thank you to Brendan Cassidy, George Feva class captain, for organising the accommodation and co-ordinating the Team George entry in this competitive and fun event.