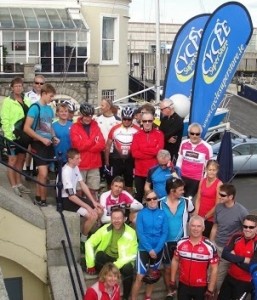 This unique event comprises of a 60 km cycle over the Wicklow mountains with three time trials and three Laser races.

35 cyclists lined up in the club for the start of the cycle. The route took them over the Vico road towards Enniskerry village. Competitors were using the cycling app Strava to automatically log their individual times on each time trial segment. It was clear from the start that Neil O’Toole was fast and when the results came in, he had won the first leg by over a minute!  O’Toole went on to win the next two time trials, followed closely by Gordon Judge and Helena Barrett. The route took cyclists up to the top of Glenncree and onwards over the Featherbeds, a total altitude gain of over 1000 metres.

On Sunday morning, three Laser races were scheduled by PRO Frank O’Beirne.  The format required that the races were a maximum of 30 minutes in length, so in less than 3 hours, three great races were sailed in sunny 10-15 knot conditions.  Race one saw Sean Craig steal an early victory followed by Paul Keane and Theo Lyttle. Race 2 saw a complete change with Ross O’Leary leading from start to finish. Neil O’Toole, the clear favourite going into the sailing leg of the challenge, was placed 6th and a 7th throwing the competition wide open.  Going into the final race Craig, Keane, O’Leary and Lyttle  were neck and neck for the sailing part of the competition and overall O’Toole and Lyttle had to battle it out for the trophy in the last race.  Craig once again led around the windward mark only to be overtaken by Keane and Lyttle on the first run. As the wind died down Lyttle squeezed ahead of Keane to win the Cycle Superstore Sail Cycle Challenge 2013.