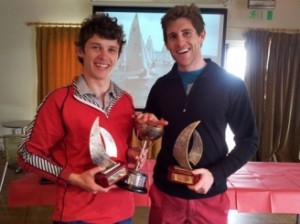 Congratulations to RSGYC sailors Barry McCartin and Conor Kinsella who battled with a very competitive fleet to win the Leinster Championships at the DMYC.

The Irish Fireball regatta season closed with the re-scheduled Leinsters being sailed in Dun Laoghaire this weekend. The event, originally down for August, had to be postponed due a lack of personnel to run the event. In has been a busy close to the season with six Irish boats in Slovenia for the Europeans and Worlds in mid-September, followed by the Munsters in Athlone the weekend after our return. Now two weeks on we have had the Leinsters.

Over the two days a total of nineteen boats turned out with Mike & James Murphy (14908) making the trip from Dunmore East and two boats coming from Clontarf on the north side of Dublin Bay, Hugh Johnson and Brian Nolan. We also saw the season debut of Owen Laverty and Ed Butler on Saturday.

The weather was kind over the two days with temperatures in the low teens on Saturday and winds out of the N – NE. Even the water temperature seemed to be quite pleasant. Four races were sailed on the first day in winds that started out at about 12 – 14 knots but eased marginally during the day. There was evidence of some rustiness with capsizes taking place and more than one set of penalty turns being taken.

Two Olympic courses started the day’s proceedings and after these it was honours even at the head of the fleet with Barry McCartin & Conor Kinsella (1509) and Kenneth Rumball & David Moran (15058) sharing a first and second each. Noel Butler & Stephen Oram (15061) were not having the best of days by their standards as they opened their account with a 4, 3. The other third place on the Olympic course went to Class Chairman & Class Secretary, Neil Colin & Margaret Casey (14775).

On the start-line of the third race of the day, the first of two windward-leeward courses, there was a “Moses- like parting of the Red Sea” for Louis Smyth & Cormac Bradley (15007) which they took full advantage of to lead the fleet up the first beat. Adam Bowers would have loved his mantra of clear water and clear wind being exploited so successfully. Gavin Doyle and Dave Sweeney (14953) were next in the pecking order. Smyth & Bradley led the race until the short hitch to the finish at the conclusion of the race. McCartin and Rumball were keeping very close company and while Smyth cleared them on starboard tack, their attacking of the committee boat end of the line was enough for Rumball to take the win, though Smyth squeezed into 2nd.

The biblical advice of the first being last and the last being first was then applied to Smyth/Bradley as they could only muster a 10th in the next race. McCartin/Kinsella took that one to finish the day with a 2, 1, 3, 1 scoreline. Rumball/Kinsella dropped to 7th in Race 4 but joined McCartin/Kinsella at the top of the leaderboard by dropping this last score. The next best performance of the day belonged to Colin/Casey who blotted their copybook with an eleventh in the second race but rose to the (near) top of the class with a 3, 4, 3, in their other three races.

Butler/Oram were in slightly unusual territory in 4th overall on Saturday evening counting a 3 and two 4ths, but they also had a 7th. Conor Clancy & Hugh Butler kept their results to even numbers with a 10, 4, 6, 2 sequence, enough to give them 5th place overall.

The last two races of the regatta season were sailed in overcast and slightly damp conditions – it didn’t rain, but there was a dampness in the air. The Race Officer gave us one Olympic course and one Windward-Leeward in breeze that had swung towards the NW quarter. However, there wasn’t as much “oomph” in it as there had been on Saturday. Sailing in slack water at the bottom end of an ebbing tide, the logic would have been to head inshore but the one boat that stayed out rounded the weather mark in second place, behind Conor Clancy (14807) – Jonathan Evans and Aidan Caulfield (14748). Smyth/Bradley were also well up as was father and son Mike and James Murphy (14908). Frank Miller & Grattan Donnelly (14713) were also well placed until helm and crew temporarily parted company on the final approach to the weather mark.

The first reach was tight and too short, leaving a long very broad second reach. The leaders overall caught up as we made our way to the leeward mark – McCartin/Kinsella, Butler/Oram, from a long way back and Rumball/Moran. Evans & Caulfield persisted in going to sea on the second beat and were still in good shape at the second weather mark. The three aforementioned combinations with Clancy and Evans took the first five places.

And so to the last race of the season! For some this was to be their best race of the regatta, Alistair Court & Joe O’Reilly (14706) and Louise McKenna & Hermine O’Keeffe (14691) had good results, but it was too little too late for this regatta. McCartin and Kinsella changed roles in the boat – a sure sign that they had the regatta sewn up! Rumball/Moran took the win to share the wins with McCartin/Kinsella, Butler/Oram recovered from an average first beat to finish second while Clancy spoiled the symmetry of his results by claiming the first odd-numbered finish of his regatta – a 3rd.

As this was the last regatta of the season, the Class AGM was held on Saturday evening, immediately after racing. In an effort to promote a discussion of the health of the Class and the need to revive our numbers, the formal part of the AGM was kept to a minimum.

After two years at the helm, Neil Colin stood down as Class Chairman but has offered to stay on the committee. In addition to his management of the Class, Neil, and his crew Margaret, who is also Class Secretary, have put a lot of effort into Dun Laoghaire Motor Yacht Club’s hosting of Fireball events, the Nationals in 2011 and this weekend’s Leinsters. Margaret will take another year as Secretary>

In what was billed as a promotion, but is in fact, a natural succession, Marie Barry, our Treasurer up to Saturday evening, took over as Chairman. Marie has looked after our accounts exceptionally well and has kept them easy to understand. Hermine O’Keeffe takes over the position of Dun Laoghaire Class Captain, succeeding Louise McKenna, while Frank Miller and Cormac Bradley stay on as Trophy Secretary and Communications Officer respectively. Stephen Oram retains the management of our website. The Treasurer’s position was the subject of some debate, with a number of candidates mentioned though none specifically said yes! In a welcome development, Conor Clancy indicated his willingness to come onto the committee.

A number of initiatives to revive our numbers were debated in the discussion that took place after the formal part of the meeting with a number of people making offers to help with a targeted marketing and recruitment drive. The Frostbite Series is our next engagement with the first round of races taking place on 3rd November. The Class prize-giving takes place on 23rd November in The National Yacht Club’s Wet Bar.

Thank you to our friends at Afloat.ie for the above photograph and following article.