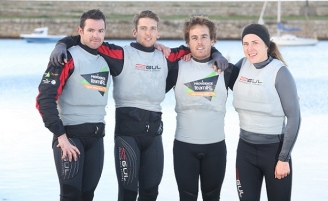 The Irish Sailing Association (ISA) Performance Department kicked off the start of the year with training camps in Gran Canaria, Cadiz and Barcelona in Spain and Sardinia, Italy.

There are now 102 sailors training as part of the ISA Performance Pathway starting from the junior pathway classes through to the Olympic classes. All of these sailors are closely monitored and follow a tailored strength and conditioning programme managed by Sports Med Ireland in addition to receiving regular coaching on the water.

Providence Team IRL consists of four Olympic and Paralympic campaigns all of whom competed in the London 2012 Games. The only change for 2014 is that Corkman Anthony Hegarty has retired from the Sonar crew to be replaced by Dublin doctor Austin O’Carroll.

The focus event for Providence Team IRL this year will be the Olympic qualifier in Santander, Spain in September and the target is to qualify Ireland in all classes. Annalise Murphy and the Sonar crew start their year with an early season regatta at the ISAF World Cup in Miami in late January.

Also working towards the opportunity to sail in Santander is the Olympic Development Squad. Irish qualification for the new Olympic female skiff class; the 49erFX will be the focus for Andrea Brewster and Saskia Tidey who showed potential at the 49erFX World Championship last September having only teamed up together just weeks before the regatta. The pair have been training hard in Sardinia over the winter with the Italian team that finished 4th in the 2013 World Championship.

Also in contention for a qualification attempt is the Laser Development Squad which had a great year in 2013.

All of these sailors, with the exception of Philip Doran, have just graduated from the Men’s Laser Radial class into the Men’s Laser Standard and all are studying for either Leaving Cert or University exams. Although they will attend training camps during weekends and holidays, their full-time campaigns will not commence until the summer months.

In addition, Gul Performance Apparel is the technical clothing partners for ISA Performance and supplies the sailors with sailing clothing.

In 2013 ISA Performance also secured a sponsorship deal with VeloRevolution – a custom cycling and Triathlon clothing supplier. VeloRevolution supply Providence Team IRL and the Development Squad with high-quality cycling gear as used by the Tour de France riders so they train hard in comfort when out on their bikes.

A supplier agreement was also agreed with High5 Sports Nutrition, helping the sailors to race harder and recover faster. Existing agreements were also renewed with both Harken and Parasol Sun Care.

The Olympic and Paralympic Squad received a boost in 2013 when Providence Resources P.l.c. agreed a four-year title sponsorship deal to assist in the pursuit of success at the Rio 2016 Olympics and Paralympics.

About ISA Performance & Team
The ISA Performance Department guides sailing programmes from junior through to Olympic and Paralympic. There are currently 102 sailors training as part of the ISA Performance Pathway. All of these sailors are closely monitored and follow a tailored strength and conditioning programme managed by Sports Med Ireland in addition to receiving regular coaching on the water.
Follow all the latest news and updates online:

About VeloRevolution
VeloRevolution Custom Cycling and Triathlon Clothing is an Irish company that had been searching for unique sports stars outside of the cycling and triathlon community to showcase its innovative products to. Through Sports Med Ireland, VeloRevolution was introduced to the ISA Performance Department and their Squads. Together VeloRevolution and the ISA believed that a partnership would be of great benefit to both organisations, offering a key insight in to how Ireland’s top sailors can prepare, train and excel while using cycling as a tool for fitness training. VeloRevolution supply ISA Performance with the best quality clothing items which use the most innovative fabrics as worn by the Tour de France riders so the team can feel great and train hard when out on their bikes.
Website: http://www.velorevolution.eu

About High5 Sports Nutrition
High5 is a leader in performance sports nutrition. Their bars, gels and drinks fuel many of the world’s best athletes. They combine the latest developments in sports science with years of racing experience to create products that will help you perform at your very best, no matter what your ability.
High5 is pleased to be teaming up with the ISA for 2014. The ISA has proved they are a great Academy for sourcing and training young athletes through their programmes and coaches to be Irish and European Champions and hopefully World and Olympic Champions. High5 believes it can provide the necessary fuel and support needed to help this happen and hope them all the best for 2014.
Website: http://www.highfive.co.uk

About Parasol Sun Care
Unlike other sun lotions, Parasol’s innovative broad spectrum and photostable filtering system protects you from harmful UVA and UVB rays. Irish Body Care is proud to sponsor the ISA Performance Department providing the sailors with Parasol Sun Care protecting them when they’re training or on the water.
Website: http://www.irishbodycare.com