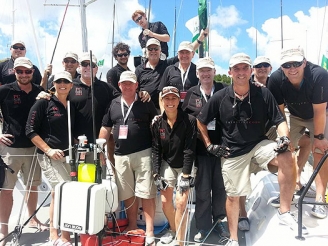 Royal St George Yacht Club offshore sailor Jerry Collins is no stranger to offshore racing having participated in four Fastnet races, two of which were on Sigma 38, Persistance.

The Dubliner has also completed five Round Ireland Races, and is a three times Class winner in the Sigma Class on Persistance in 2008, 2010 and 2012 so it was easy to see why – having retired from the race in 2012 – the call of Australia’s Sydney-Hobart race was hard to refuse this Christmas. Here Collin’s describes the race onboard the Farr 40 Primitive Cool

In 2012, our RI bowman was Australian Matt Fahey (whose father is former Prime Minister of New South Wales and presently Chairman of the International Drugs in Sport Monitoring Body). Matt’s grandparents were from Galway. Matt then invited me to do the 2012 Sydney Hobart on a Farr 40 which he was skippering/managing in Melbourne for the owner, John Newbold.
I did the Sydney Hobart in 2012 on the Farr 40, named Primitive Cool, as helm and navigator.

Three days into the race, having led our class by 14 miles at one stage, we suffered significant rig damage and were obliged to retire from the race and motor sail back to Eden, lest we lose the mast and rig and as the owner John Newbold was not on board, retiring was deemed the prudent, if unpalatable decision to make.

By the time 2013 rolled around it was decided to do the race again…we just had to finish what we had started!

Just 2 months before the race start on Stephens Day, John Newbold made the very bold decision to replace the Farr 40 with the new ‘Primitive Cool’, namely the old ‘Secret Mens Business’, a Reichal Pugh 51.

So, Primitive Cool, now with a crew of 15, 11 Aussies, 2 Brits, 1 Norwegian and 1 Paddy (myself), started the race with the primary objective of finishing the race this time, in view of last year’s retirement.

It was clear in the first few hours, even in 5-10 knots of breeze that we would be competitive in our class and perhaps even overall. The first 24 hours was more or less a beat in 5-10/15 knots. The second day was mostly a reach in increasing wind strengths of up to 25 plus knots.( They say in Australia that they do not take down spinnakers until God actually takes them down and then they just put up a smaller one!)

The last (3rd day) 24 hours was very much a beat in gale/storm force winds averaging 37/38 knots and gusting up to 58 knots. These conditions did not come as a surprise to us as they had been predicted very accurately by the Australian BOM (Bureau of Meteorology )in the days before the race start, to come in from S/SW as we beat down the Tasmanian coast.
In view of the horrendous conditions prevailing over the last 12 hours, Primitive Cool sailed in the lee of Tasmania to seek some degree of shelter. At the end of the day this however cost us 2/3 hours at a crucial time which may have prevented us from attaining a podium place by a relatively small margin, after 3 days plus of hard boot to the floor racing.

Ultimately Primitive Cool finished 4th on IRC in Class 1 (21 boats in class) and 15th overall ( 94 boats starting)…a great result in all the circumstances particularly when we were competing against mostly much, much larger, faster boats crewed for the most part by full professional crews.

Now, if only we could transport Primitive Cool to Wicklow for the Round Ireland next June!