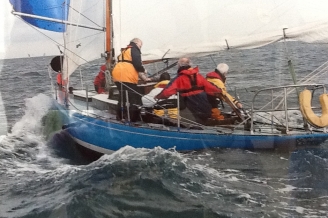 Member Graham Crisp reflects on 38 years of shared boat ownership, friendship and sailing at the Club.

It was not without considerable sadness that I received a cheque for my share of the Shipman  “Euphanzel 3“ last November. With that cheque came the end of a long and very happy boat ownership which had lasted for 38 years and had, over that period, included 18 members of the George. Those numbers might well merit a mention in the Guinness Book of Records, but much more importantly, as one syndicate member put it, “a remarkable investment in friendship.”

The Euphanzel story  in syndication began in 1975 when Dick French, the then sole owner, asked some of us who crewed for him to join him in joint ownership of Euphanzel, one of 7 Dublin Bay 24 footers then racing and cruising out of Dublin Bay. Those of us invited accepted the offer and joined Dick in a 7 member syndicate quickly christened “The Magnificent Seven” by Sean Doyle the head boatman at that time. Apart from Dick French and myself, the other original members were Louis McSherry, Brian Cox, Pakenham Pim, George Geoffroy and Alec McNair. In those days handicap class racing was well established but the one design fleet of the 7 24s under spinnaker on a fresh day on the bay was an awesome, if not terrifying sight, if you should be down wind crossing the fleet close-hauled on a port tack!

Over the following 28 years, we campaigned Euphanzel through the annual racing programmes of both DBSC and the RAYC, with occasional cruises to West Cork etc. As wooden boats go, a 24 footer was about as expensive as it gets to maintain in a seaworthy racing condition and so the wisdom of a large syndicate was soon apparent to us. Therefore, as members retired or expired, it became vital to find replacement members as quickly as possible, thus social as well as nautical skills became a requirement for syndicate membership. Over the course of our ownership, a further 11 members joined us. They were  (in no particular order), Tim Lloyd, Jim Boylan, Tricia Crisp, Jerry Liston, Ivor Cherry, Jill Cox, Paul McQuaid, Tom Kennedy; John Simington, Colm Duggan and Leo Keegan.

It could be argued that our social skills were superior to the nautical ones for at one stage we had 3 syndicate members on the General Committee of the George. In 1999, on the occasion of the World Team Racing Championships being held at the club, we presented a Firefly dinghy to the club and named her Euphanzel 2.

During all those years, I cannot recall a single incident of dissent amongst us all and find great satisfaction in the enduring friendships forged through the wonderful sport of sailing. We thought of ourselves as Corinthians and hardly ever deviated from the truth when before a Protest committee!

From keel laying on the Clyde in 1938 to the turn of the Century was a long time for these beautiful yachts to last without a major refit and the cost of such an undertaking was totally out of proportion to their value. All the 24 foot owners were very mindful of the fate that befell our sister fleet, the 21 footers which came to a sad end in a field near Arklow, despite strenuous efforts to find some survival  funding for one or two of them.  As our lovely 24’s became increasingly unsailable, so did we. All the fit young sailors wanted fast plastic and electric bilge pumps. Thus, it was a happy group of 24 foot owners who gathered for a celebration dinner at the end of the 2003 season, a buyer having been found who bought the entire fleet at a very fair price, with a view to rebuilding them all for sailing in a classic yachts fleet in the South of France.

Sad as we were to part with the Euphanzel 1, we decided to stay together and buy another boat with the proviso that it was plastic, had proper headroom below and was in a one-design class. We found a Shipman which fitted our criteria perfectly and bought one which we re-named Euphanzel 3.  We thoroughly enjoyed our new boat and happily raced her around the bay until the end of last season when it became clear that most of us were in need of a major refit and were no longer at the cutting edge of yacht racing.  And so we sold Euphanzel 3 and ended what for many of us had been a very large slice of our recreational lives.

The Royal St George Yacht Club and many of our members, Margaret Hill in particular, participated in our little Odyssey through the last 38 years, for the George was the fulcrum around which the syndicate revolved. Indeed, one club member suggested we should be institutionalised!!  I was never quite sure if I understood the suggestion correctly.