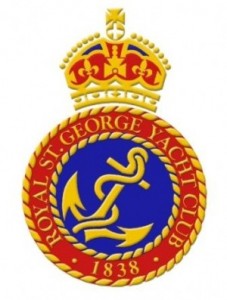 Irish sailing is mourning the loss of leading small boat sailor Graham ‘Elmo’ Elmes (39) of Dun Laoghaire who died tragically at the weekend.

His funeral took place on Wednesday. Warm tributes to the talented sailor are being paid from across the waterfront of his home port and beyond. See below from Anthony Shanks, John Sheehy and more sailors.

Graham, a popular member of the Royal St. George Yacht Club, was a champion in a number of Irish dinghy classes and also a driving force in the development of Irish sailing, where he will be sorely missed.

Graham is survived by his father and mother Frank and Marie, brother Robert and sisters Kathy and Mia.

Most recently Graham competed at one of his favourite events, the long running DMYC Frostbite series in Dun Laoghaire, only narrowly missing out on the overall Laser division title.

A software engineer by profession, ‘Elmo’, started sailing aged 14, first competing in the Mirror dinghy junior national championships in Howth in 1989.  Six years later, he went on to finish third overall at the Mirror Worlds in Wales and fifth at the Team Racing Worlds in Newport 2005.

An avid dinghy helmsman or crew he was equally at home as a race officer or coach, last season working as a coach and mentor to the Irish Mirror Worlds team on Lough Derg.

He took his competitive sailing seriously and was a top performer on the national and international stage in the Olympic 470 dinghy, SB20s, Dragons, Etchells, GP14s, Fireflies and many other classes. He was also a driving force on the varsity and team racing circuits where he regularly coached college teams including his old alma mater, Dublin University Sailing Club (Trinity).

Elmo was a passionate advocate for sailing and consistently argued that more should be done to attract new blood into the sport of dinghy sailing in Ireland. He believed there should be a move away from the current preoccupation with high performance Olympic sailing. ‘We need more kids sailing for fun’ he commented on this website in a number of thoughtful contributions on the question of the future of Irish dinghy sailing.

A great man of our sport

Elmo, where do I start, there are many who have known him longer than me, but during the times that we spent together racing the Dragon with Andrew Craig I would have to say they were amongst the greatest of days. I first raced with him in 1999 when we won the first event we did, the dragon east coast championships. This was the beginning of a fantastic team which collected many regional championships a national championships and a European Silver medal.

This was only part of the man I knew, with a wit he would keep Andrew and myself from mistakes that could end regattas and his enduring line was ‘we are near 90 percent lets tack’. It didn’t matter what the conditions he reveled in them, that must have been the mirror sailing… As a tactician he had few equals as a baby sitter he was questionable. We were offered tickets to watch Chelsea and Man United at Old Trafford, Graham climbed into the back of the car with the children and then proceeded to teach them all the bad jokes, then on the ferry he set about schooling them in cards. A trip to the snow dome then to the curry mile was followed the next day by an experience to remember in a box, we were all like children.

Moving to the country took us away from all of my sailing friends yet Graham was a great visitor always chasing the children around the mill pond and latterly with his little dog Jimmy who took no notice of anything he was told to do…. RA Shanks

It was with huge sadness I heard of the passing of Graham Elmes on Sunday. Graham was a member in Sutton Dinghy Club only a season but his arrival was a hugely positive one for both the GP14 fleet as well as Sutton Dinghy Club itself.

I got to know Graham while sailing Etchells in Howth Yacht Club some years back. Then in 2012 my son David was taken to the GP14 Autumn & Youth Championships in Sligo for his first race in a GP14. Finishing 9th overall in the event and top U16 in tough conditions, he was greatly taken by the boat and the support from his crew. In the Youth event he was crewed by Graham Elmes.

The following week, I called Graham to thank him for looking after David. Graham had no idea David was my son but had been delighted in helping give the younger sailors an opportunity to experience racing a GP14. He talked about getting his own GP14 and felt sailing from Sutton Dinghy Club might afford him the ideal opportunity to get back into racing dinghies again.

In 2013, Graham bought himself a decent boat with the aim of building a campaign through to the Barbados Worlds in 2016. He campaigned out of Sutton Dinghy Club throughout 2013 including some great performances in the Championship and at our end of season frostbite event in November last. Following this Graham had sent his boat up North for some repair work and a re-paint in preparation for a busy season in 2014.

As recent as March, Graham gave a rousing presentation at the ISA Conference on behalf of the GP14 Association outlining why he was back sailing dinghies and how the GP14 might be a key boat in helping keep youth sailors in dinghy racing. A successful Mirror sailor himself in his day, finishing 3rd at the 1995 Mirror Worlds, Graham saw a natural transition from Mirror to GP14.

Graham was well known to many of our junior and youth sailors in Sutton Dinghy Club in his role as coach to the Irish Mirror fleet, especially in preparing for the Mirror Worlds in Lough Derg last year. Many of those youngsters took inspiration also seeing Graham race his GP14 in Sutton throughout 2013. Graham never had a problem sharing his time and his experience when coaching or indeed when down preparing his own boat in the dinghy park.

Taken far too soon, Graham will be greatly missed by Sutton Dinghy Club and by all who knew him in sailing. Our thoughts are with his family.

Graham and I started sailing at the same time; he was my friend, my rival but always my friend. It was a privilege to be there to see him finish third at the Mirror Worlds in Wales 1995 and fifth at the Team Racing Worlds in Newport 2005.

Graham had an amazing ability to make any boat he sailed go fast and this with his tactical ability (he was a keen reader of Stuart Walker) and attention to detail in boat preparation made him near impossible to beat. If you were ahead of Graham, you were doing very well.

His enthusiasm and knowledge for sailing and his story telling ability had a magnetic effect, as Mirrors sailors we can all recall so many jokes and laughs. He used these talents in his coaching too; he was the head coach at the Mirror Worlds in South Africa in 1999 where Ireland finally won – and won everything. The team spirit, the craic (singing Fr. Abraham) and of course the performance were down to him.

But what I admired most about Graham was the time he gave back.
Despite being one of the best sailors in the country, Graham always had time for all of us. He easily put more into sailing than he ever took out of it. He was the first guy I always called when I needed help and he always helped. Just a few weeks back he acted as the OOD for the Leinster Schools Championships when I called him at the last minute. Of course, the event ran like clockwork.

He will be missed greatly by all of us, but especially in the Team Racing community. It was his work that has shaped so much of what we now take for granted; he established the Irish Team Racing Association, created the events, sorted the bibs and so on.

Graham, you will not be forgotten.

Thank you to Afloat.ie for the above article