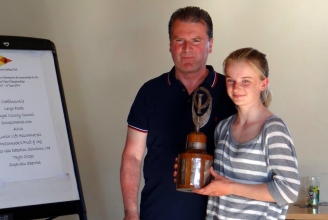 A huge high pressure system sitting over the east coast meant that little wind for the weekend and racing had to be abandoned after several hours of attempted starts on Saturday.
Sunday morning brought some light / medium breeze but with lighter wind forecast later in the day. The Race officer launched the fleet early to try to get one ahead with a fourth race scheduled. Light and shifty conditions along with strong spring tides dominated the day’s racing.

Grace O’Beirne who represents RSGYC on the Irish team at the Optimist Europeans scored a second place having emerged among the top few rounding the first windward mark. The second race saw her having to claw back places from a poor start to squeeze around the first windward in third place thanks to the leaders over-standing the layline in the strong tide. By the finish line this had improved to second place. This left Grace on close on points with James McCann of RCYC (1,3) and Daniel Hopkins of HYC (4,1) going into the third race, but in second  place overall on count-back. Several other boys were also within striking distance of these three. Race three followed with the same few emerging at the top mark with James McCann in the lead. However on splitting gybes on the run, Grace managed to pull out a large enough lead to secure a win to lead by a single point going into the final race scheduled for the day.

Also racing in the senior fleet were Sara Fogarty fresh from her victory in the Friday night series in Dun Laoghaire scoring a fifth in the Silver Fleet as well as Leon Montgomery and Tara Coakley who were in the mix and represented the club well in testing conditions.

Liam Dineen, P.R.O. tried in vain to get a fourth race under way but in a dying breeze and strengthening tide it was a lost cause. This gave overall victory to Grace O’Beirne and the first for RSGYC in the Optimist fleet for several years. All eyes will be on the Optimist Leinsters in RIYC on 5-6 June in advance of the Optimist European Championship in our club on 12-20 July.