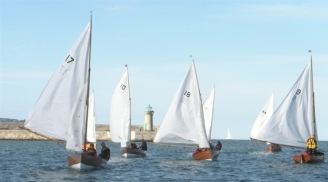 The Water Wags competed for the National Yacht Club Regatta on 18th June. The plan was to hold two races within Dun Laoghaire Harbour.

The evening was warm and the sea breeze was showing signs of disappearing entirely. Tom Hudson and his team were particularly careful to lay a good windward-leeward course with a leeward gate.

22 Water Wags came to the start line, but they were too anxious and a general recall was declared. A restart was arranged quickly. This time Frank Guy and Owen McNally in Gavotte along with John and Dara Magner in Marie Louise and Vincent Delany and Noelle Breen in Pansy got the best of the start. These three were the leaders around the windward mark. On the downwind leg William and Linda Prentice showed great speed and pulled up to third place by the leeward gate. The leading group took the port hand leeward mark to benefit from the ebb tide from the mouth of the marina. Gavotte, Marie Louise and Tortoise swapped several times over the duration of two and a half laps of the course. At the finish Tortoise appeared to be in the lead but she was not laying the line so four boat lengths from the finish line, Gavotte and Marie Louise were forced to tack to lay the line, At that point, Tortoise crossed ahead of them both on starboard tack, but she was not laying the line. When she tacked she lost momentum and the other two boats pipped her by about a meter.

At the Tapas and Strawberry super at the National Yacht Club prizes were presented to: