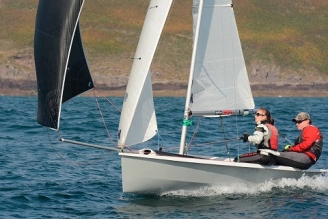 Congratulations to RSGYC sailors on a clean sweep at the RS200 Southern Championships last weekend.

A good turnout for the final event of the season for the 200 fleet, made for some very competitive racing, and we may see a cork fleet develop next season in this exciting class. Ronan O’Driscoll and Shane Dunlea are sailing out of MBSC and many heads were turned in the RCYC at the weekend, by a boat that combines high performance and well worked out systems that are easy to use.

Day one was all about Marty O’Leary and Rachel Williamson (RSGYC), who mastered the conditions and dominated the fleet with a clean sweep of three race wins from three on day one. Marty had made the move from competing well in the 400 with Brian Fenlon recording an 8th at the Nationals in Galway this year.

Blair Stanaway and Heather King (RSGYC/Westport) were hanging in there with two seconds and a third to open, as were Stephen Craig and Conor Foley (RSGYC) with two thirds and a second.

It was to be more of the same from Marty and Rachel on day two, recording an impressive fourth race win from four, before allowing Blair and Heather to win the fifth race. Marty and Rachel however had now won the RS200 Southern title with a race to spare in a superb first outing.
Second was Blair and Heather two points back and third was Stephen Craig and Conor Foley a further five points adrift.

The 200 is a newer boat than the 400 and has a lower weight band being similar but slightly less powerful. The fleet in the UK is very large and strong, allowing easy access to affordable and fast second hand boats. There are also demo boats available in Ireland so please enquire if you are interested in getting involved. We are expecting growth next year country wide in this exciting class