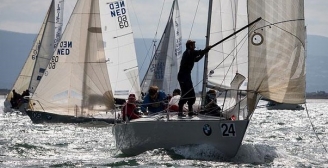 Flor O’Driscoll’s Hard on Port from the Royal St.George Yacht Club has taken the J24 national title for 2014 after three days of racing at Lough Erne Yacht Club in Co Fermanagh.

In the final day of racing at the Northern Ireland club, Hard on Port took line honours in the penultimate race of the day to set up the Royal St George Yacht Club entry for the title. Stefan Hyde’s RCYC entry, Hamilton Bear, pressed hard on the final day but was unable to mount a challenge strong enough to grasp the title away from the vastly experienced Munster man at the helm of Hard on Port. Lighter winds were an ease to the competitors after the two previous days of gruelling conditions and with the sun shining down on Lough Erne, the trip up north paid off for the visiting boats. Line honours for the last race of the day went to U25 crew on Kilcullen from Howth Yacht Club as local boat Jamais Encore pressed for a runner up spot.

Day two of the Irish J24 National Championships made for a gruelling affair for the competitors as winds gusted above 25 for most of the racing day writes Andrew Carey. With it brought a change to the leaderboard with Flor O’Driscoll’s Hard On Port taking line honours in the first two races of day two. Unfortunately for the leader after day one, JP McCaldin’s Jamais Encore, retirement from race one due to a damaged rudder meant that running repairs were called for as the fleet raced on in race two, but tantamount to the resolve of the Lough Erne boat, JP and his crew returned to take line honours in the final two races of the day. With heavy winds and squalls rolling in off the north western shores, the 12 crews took their punishment as the country’s best J24 boats battled and vowed for the lead which changed throughout the tight racing.

With 6 races sailed, Hard On Port has the lead by three points over Stefan Hyde’s Hamilton Bear and Jamais Encore and further eight points back.

With two races to sail on the last day, close racing will again be to the fore as the top boats battle it out for the national J24 title.

Day one of the J24 Irish Nationals at Lough Erne Yacht Club got off to a blustery start in the Northern club yesterday as winds gusting up to 25–knots challenged the fleet of a dozen boats for honours over the first round of the three day event. After two races, local boat Jamais Encore helmed by JP McCaldin has the jump on the fleet with a win in the first race followed by a 4th in race two as conditions settled. Tight racing was the order of the day as the lead boats chopped and changed throughout the race legs. Race two honours went to Tim Corcoran at the helm of Crazy Horse from Sligo Yacht Club. Overall, the top five boats in the class are separated from each other by just one point – Jamais Encore (JP McCaldin LEYC), Hamilton Bear (Stefan Hyde RCYC), Jellignite (Finbar Ryan LRYC), Crazy Horse (Tim Corcoran SYC) and Django (Martin MacNamara RWYCI / LRYC.

Thank you to our friends at http://www.Afloat.ie for the above reports.