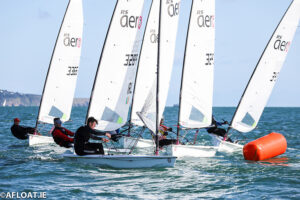 In his RS Aero, Brendan Foley made a clean sweep of the first PY races of the Viking Marine Frostbite Series 2021-22 at Dun Laoghaire Harbour on Sunday afternoon.

After a break in 2020, the country’s longest-running winter dinghy racing resumed on Sunday, with sponsorship from Viking Marine and a sell-out 110-boat fleet.

The Royal St. George solo sailor took wins in both races that were dominated by the Aero class.

In the first race, another boat type broke into the top three in the 21-boat PY division when Frank Miller in a Fireball took a second.

In the Laser divisions, Royal St George’s domination was evident with their sailors taking all the podium positions (except two) in both races in all three divisions.

Both counting a one and a two, DMYC/HYC’s Luke Turvey and RStGYC’s Brendan Hughes share the top points in the Radial’s 21-boat turnout, the most significant Laser division.

The George’s Gavan Murphy won the first race of the six-boat full rigs, and clubmate Chris Arrowsmith won the second.

Royal St. George’s Daniel O’Connor took the gun in Race One in the ten boat 4.7 class and Sam Legge, also of the RStGYC, second.

Due to Covid restrictions, there was no prizegiving in the DMYC after sailing,

After an enforced break due to Covid regulations in 2020/2021, the Dun Laoghaire Motor Yacht Club-hosted Frostbites returned to the waters of Dun Laoghaire Harbour with a new sponsor in the form of local chandler, Viking Marine, also based in Dun Laoghaire.

The organisers of the event decided that an entry cap of 120 boats would be put in place so that an awareness of the ongoing Covid situation could be signalled to all potential competitors and that number was reached in advance of the first weekend of racing.

The breakdown of numbers gave us a potential 38-boat entry in the PY Class consisting of Fireballs, Aeros, GP14s, RS400, IDRA and a variety of Lasers – Vago, etc. Laser Radials mustered a 40-boat entry and there were healthy numbers for the Laser 4.7s and Full Rigs.

In the build-up to the first weekend of racing, November 7th, the wind forecast started off as being quite heavy with even heavier gusts, but as we got to the tail-end of the week, a more genteel forecast was evolving. Sunday morning arrived with a forecast that put the wind in the mid-teens with gusts in the low to middle twenties (knots). However, with the wind projected to come out of the West, that would mean a slightly protected harbour and race-course area.

Onshore discussion between Frostbites Director, Neil Colin and Race Officer, Cormac Bradley, in advance of going on the water, resolved that with the forecast and the fact that we had done no Frostbiting for over a year, it would be prudent to run with Windward-Leeward races for the first day of the new series and that would give everyone a chance to re-acquaint themselves with the Frostbites regime.

Mother Nature played her part as well by giving us as close to a steady breeze as she permits which allowed a weather mark to be set just north of the entrance to the marina and that stayed in place for both races. With a Westerly (270°), we are able to use the biggest dimension of the harbour, and a leeward gate was set up using the hand-buoys of summer moorings to fix the marks inside the Boyd Memorial on the East Pier.

The Full Lasers and 4.7s, sailing as one fleet, mustered nineteen boats, eight full rigs and eleven of the smaller rigs, respectively.

The Laser Radials won the attendance prize with 23 boats on the water.

With a 62-boat fleet to watch and a good breeze to get all the boats around the course, this correspondence is unable to give an account of the racing. Suffice to say that there was no definitive way to sail the beats, which is what a Race Officer wants, but there was some close on the water sailing witnessed across all three fleets.

In the early part of the first series of races, the breeze got up to about 15/16 knots, but it was evident that the base breeze was falling though there were enough gusts coming through to see windward rolls from the Lasers and a few flogging spinnakers from the Fireballs.

By the second race, the wind had dropped to around the 10-knot mark and faded a little more as the afternoon wore on. However, there was enough around for everyone to have enjoyed this “first day back at the office”.

In terms of club affiliation, five of the six-race finishes were taken by Royal St George Yacht Club members, with Luke Tierney the only race winner from the host club (DMYC).

In compliance with Covid best practice, there was no daily prize-giving and the proposal is that there may only be a single prize-giving event

Each Sunday’s race results will be posted to the DMYC website after racing rather than being posted immediately inside the DMYC clubhouse. This is a Covid prompted safety measure. at the end of each series, subject to the regulations in place at that time.