The Kingstown Boat Club, from which the Royal St. George Yacht Club evolved, was founded in 1838 by a small group of boating enthusiasts who had decided that ‘the (River) Liffey was every year becoming fouler and less agreeable for aquatic pursuits’.

They applied to the Commissioner for Public Works, and were granted a piece of ground near Dun Laoghaire Harbour on which to build a clubhouse – the first privately owned building to stand on publicly owned space. Initially, the members’ main interest was in rowing, but membership grew rapidly, and amongst them were many well-known yachtsmen of the day.

One of these was the Marquis Conyngham, who used his influence with Queen Victoria to have the privileges of a Royal Yacht Club conferred in 1845. The Club flag was to be “the Red Ensign with a crown in the centre of the Jack” and the Burgee was red with a white cross with a crown at the centre. This, of course, is the St. George’s Cross, and is quite possibly the reason why, in 1847, the Club became The Royal St. George’s Yacht Club, although this has never been established. It subsequently became the Royal St George Yacht Club; it is referred to by all who know it, as simply ‘the George’.

The new clubhouse was the first custom-built clubhouse in the ancient seaport of Dun Laoghaire (or Kingstown, as it was known from 1821 to 1920). 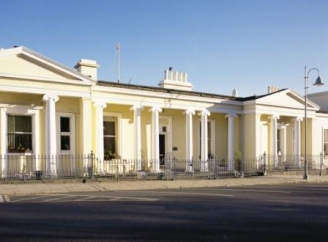 The clubhouse was designed by Mulvany, a follower of Gandon, designer of the Custom House in Dublin, and he produced a beautiful miniature Palladian villa in the neo-classical style.

The builder was Masterson, who built many other beautiful houses in the neighbourhood, including Sorrento Terrace, Dalkey. Work was completed in 1843, but, incredibly, such was the growth in membership, that the clubhouse was already too small. Permission was granted by the Harbour Commissioners in 1845 for an extension of the original façade, which involved clever duplication of the existing Ionic portico with the erection of a linking colonnade between. The symmetry and classical grace of the clubhouse was thus preserved in the new building.

The George has a long tradition of racing and cruising, and members have, from the start, made their mark in home and international waters. In 1851, the Marquis Conyngham, Commodore, competed in his 218 ton yacht “Constance” in the Royal Yacht Squadron Regatta. An American yacht called “America” won the race! In 1893 William Jameson, of the eponymous distilling family, was asked by Edward, Prince of Wales, to be sailing master on his new yacht “Britannia”. He won 33 out of 43 starts in her first season.

In 1963 a major restoration project was undertaken to repair and update the Club’s facilities, and this attracted a large number of new members who were ultimately to pave the way for the later developments, including a much-envied multi-purpose club room, a state-of-the-art forecourt extension for dinghies and keelboats, and a fully-equipped dock.

2008 saw the culmination of five years of planning and building when the new sailing wing was opened for use. Consisting of a new junior room, racing office, committee room and administration office this area is joined to the older building with a lovely light-filled atrium. Stylish and functional changing facilities for the ladies and upgraded male changerooms have increased the club’s capacity to accommodate larger numbers of sailors for world-class events. A refurbishment of the Clubroom further complimented this full-service sailing section and has elevated the Club’s status resulting in it being chosen to host the 2012 ISAF Youth World Championships.