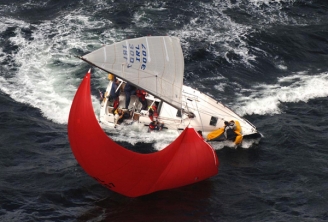 The Beneteau 31.7 class is not new to Dublin Bay, as boats of this type have competed in DBSC in the Cruiser 2 class for some years.

However during the 2006 season, due to their increased numbers, DBSC granted the class its own start, thereby facilitating one-design racing for this cruiser/racer. One-design rules were drawn up to discourage modifications, maintain a level playing field and set a generally ‘Corinthian’ ethos. To preserve the cruising dimension, boats race with cushions aboard.

Numbers entered in DBSC have settled down to approx 18 boats, and regular Thursday and Saturday attendances over the season are usually of the order of 14 to 16 boats, reflecting good participation by members.

Racing is close and competitive. In addition to scratch results, ECHO results are also posted. This combines the best of both worlds, providing one-design racing which the members like, while also providing an incentive and interest in turning out for those boats who may not always approach podium position on scratch.