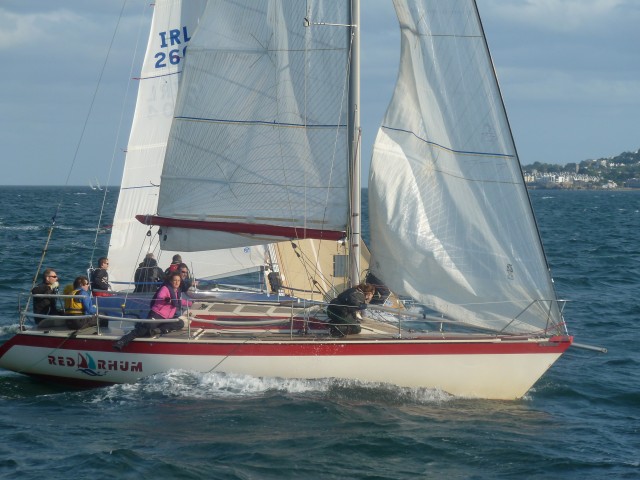 In the context of club racing - racing cruisers certainly does not mean cruising!

Kinsale Yacht Club’s cruisers are raced in club racing on Wednesday nights and Saturday afternoons during the regular sailing season (May to September) and raced further a field during the myriad of Open Meeting Regattas that are organised all over the country nearly year round. Club races are sailed over short courses around pre-set buoys in the waters adjacent to Kinsale. Races last no more than 90 minutes during the week and up to three hours at weekends.

At Kinsale Yacht Club there are four Cruiser class divisions, Cruisers 1, 2, 3, & White Sail and they are divided roughly by length. Cruisers 1 are the largest and they range from between 38 and 52 feet (11 to 16 metres), Cruisers 2 are generally between 30 and 38 feet (9 to 11 metres) and Cruisers 3 are the babies and are from 24 to 30 feet (6 to 9 metres) in length. White Sail Cruisers can be any of these but do not sail with spinnakers and so are a separate fleet.

Crew are always in demand.

And this makes cruisers a great way to discover sailing for the first time and also a great way to meet new people and enjoy getting involved in some serious teamwork.
With any yacht, the challenge for the crew while racing is to sail the boat safely around the course with precision and skill ahead of the opposition. Cruiser racing is the most popular type of yacht racing in Ireland and indeed around the world. With cruisers that have a lot of crew onboard there comes a certain amount of specialisation in roles compared to smaller classes and this only increases the skills and rewards required in the coordination of a big team. Some, but not all jobs are physical, most jobs require teamwork but all jobs are for the betterment of the boat’s performance.
Cruisers are all different

Assuming all crews are equal many things make a yacht perform, not only length but configuration, weight, beam, sail area, draft, age and many other parameters. So when it comes to racing dissimilar boat types, where generally a larger boat is faster than a smaller boat, a handicap system must be used to attempt to equalise the disparate performance parameters.

There are two handicap systems used in Ireland, very often they are used together for separate classifications amongst the same fleet, a race within a race, and they have two very different roles:

IRC – This is an international rule that uses a scientific approach in making estimates of a boat’s potential speed against a scratch boat by measuring the important performance producing parameters such as weight, length, sail area, hull type, etc. This yields a number, the boat’s handicap, which is multiplied by the boat’s elapsed time, the time spent racing around the course, to give the boat’s corrected time. When all the boats in the race have finished and have all had their corrected times calculated the boat with the lowest corrected time is declared the winner.

ECHO – This is an Irish rule and is similar to IRC in that each boat has a handicap number used for calculating corrected time. Where it differs, however, is that the handicap number can vary significantly during the course of the season and is adjusted by the club’s handicap committee based on the performance of a boat in each specific race. At the end of each race, the entire fleet’s handicaps are adjusted for the next race so that they would all finish the last race they sailed with the same corrected time. This effectively penalises the last race winner and encourages the boats proportionately down the ranking so that they do better next time.