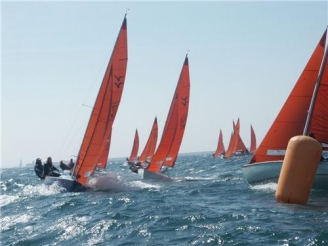 Squibs are two-man keelboats measuring seven metres long. They are favoured both as an exciting racing boat, because of their strength and safe design, and as a teaching boat. The Squib Class fleet is one of the largest one-design fleets in Britain and Ireland, with over 810 boats.

The Squib was designed in 1967 by Oliver lee as a successor to his Ajax 23. The prototype was built in cold moulded wood and sailed extensively over the winter of 1967-68. After successful proving trials she was used as a plug and the first GRP Squib was launched in June 1968. By the end of that year, there were six Squibs racing on the Crouch and they had grown into a substantial fleet by 1969 with new fleets forming at Waldringfiled, Brixham, Abersoch and Aldeburgh. At the Yachting World Keelboat Rally held in 1969, the Squib was pronounced to be the most interesting entry. When numbers passed 300 in 1972 the Squib was granted national status.