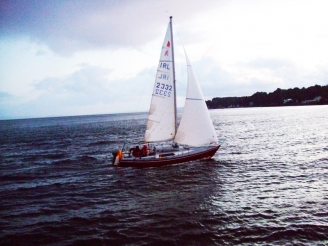 The Ruffian 23 is a 23 foot keelboat which was designed and built by brothers Dickie and Billy Brown of Portaferry, Co. Down, 35 years ago.

The Ruffian 23 is a great one design racing boat, an extremely family-friendly boat, and despite its size, the Ruffian 23 has cruised waters around Ireland, the UK, and further afield. Approximately 200 Ruffians were built and many are still raced regularly in Dun Laoghaire, Wicklow, Skerries, Baltimore, Carrickfergus, Strangford Lough, around the Clyde, the Isle of Man, and even as far afield as Hong Kong and Uruguay.

An annual feature of the Irish Ruffian calendar is the North v. South Team Racing event which is held alternately in Carrickfergus and in Dun Laoghaire.

A good fleet of Ruffians competes in the annual Lambay race, and a Ruffian, Shannagh, was the proud winner of the Lambay Lady trophy in 2004.