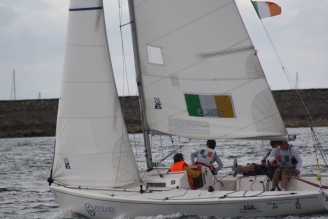 A match race is a race between two competitors, going head-to-head. Match Racing in Ireland is extremely competitive and well-fought.

Match Racing is best known as a regatta for two sailing boats racing around a course. It is differentiated from a fleet race, which almost always involves three or more competitors, by slight variations in the rules and large variations in tactics.

Most match racing is between one-design boats, meaning that ideally the boats should perform identically on all points of sail and that any differences in performance are attributable to the crew. The most notable match race is the America's Cup which was until recently sailed by boats of the International America's Cup Class, which is a formula class. The design of America's Cup Class boats is controlled by a complex formula which allows designers a fair bit of room to optimize for different expected conditions. This has resulted in boats that do not perform identically on all points of sail, which opens up another match racing tactic of forcing the opponent onto an unfavored point of sail. During the 2003 America's Cup Challenger Series between Oracle BMW Racing and Alinghi, for example, the Alinghi boat was heavier but more powerful and favored on higher points of sail downwind. Alinghi used the tactic of getting to leeward of Oracle on a downwind leg and forcing her up onto a course where Alinghi was comparatively faster, although Alinghi herself could have sailed faster to the finish line on a lower course.

The World Match Racing Tour is the world's pre-eminent monohull match racing series. It is sanctioned by the International Sailing Federation (ISAF) with 'Special Event ' status.

The Tour comprises a series of 9 events which cross 3 continents during the season combining the adrenaline-fuelled excitement of match racing with close to shore racing which provides spectacular heart of the action views for the onshore audience. The championship series uses identical locally supplied racing yachts and includes such world class sailing venues as: Marseille, St. Moritz, Portimao , Kuala Terengganu, Gyeonggi and Hamilton.

A new event for Sailing at the 2012 Summer Olympics is Women’s Keelboat Match Racing, using the Elliott 6m.