The RSGYC is delighted to welcome the 29’er International fleet to Dun laoghaire for the 29’er EuroCup 2021 proudly hosted by the Royal St. George Yacht Club from September 11th- 12th  2021. 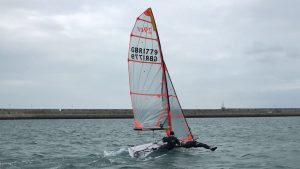 The Royal St. George Yacht Club and Irish 29er Class are delighted to extend a “Cead Mile Failte” to the International 29er. The idyllic waters of Dublin Bay will play host to the 7th Eurocup of the 2021 season from the 10th-12th September. The combination of flat water and strong winds will make for some fast, furious, and fun racing! The Royal St. George (or “the George” as it is affectionately known by the Irish sailing community) is renowned not only for its world-class race management but also for its warm hospitality. So, save the date and come and enjoy the newest event on the 29er racing calendar. We look forward to seeing you all in September!

The 29er is the newest and hottest double-handed class in Ireland. The 29er is a fast and exciting option for sailors drawn towards high-performance classes or those who just feel that need for speed. The class is popular amongst youths, however, it is an open class. Dun Laoghaire clubs have seen the class swell in recent years. The Royal St George in particular has seen the class grow to be the most active double-handed youth class in the club with teams training daily during summer months and every weekend during winter. The club hosts class training throughout the winter months.

The Eurocup Series is a series of 8-10 regattas held throughout Europe. A boat’s best 5 results at any of the Eurocup regattas are scored and the grand final is held in Lake Garda, Italy each year. Sailors from across Europe compete in the series. Numerous past competitors have gone on to sail the 49er and 49er FX Olympic Classes.

Given the close proximity, it is expected that a large British contingent will attend this year’s event in Dublin Bay and up to 50 boats are expected to enter the event in total. It is worth noting that British 29er National Championships often attract 80+ entries.

While the class is popular with those who have their eyes on future Olympic campaigns, there is no shortage of fun and comradery for those who are more relaxed and just love the feeling of going fast. Nothing beats the feeling of tearing downwind in a blow with your best friend beside you! The 29er skiff is a single trapeze skiff designed for combined crew weights from 110Kg-130kg. However, in reality, there are lots of teams sailing outside this range. The double-handed nature of the boat means that sailors are not as restricted by their weight as in other classes such as the laser.

Please go to the event Virtual Race Office for all details.