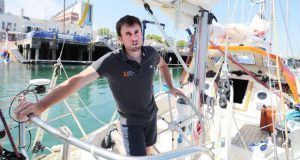 In 2018 July, 50 years on from the original Golden Globe legendary race, Gregor McGuckin,set off as one of 18 competitors. In 1968, the sole finisher out of nine entries was Sir RobinKnox -Johnston. Gregor and his fellow competitors were attempting to replicate this race by sailing alone, non-stop around the world, only using technology from the 1960&#39;s. This means no GPS, satellite communications, water-makers and modern light-weight materials.

On September 21, after 86 days at sea, in the depths of winter in the Southern Ocean, he and a fellow competitor, Abhilash Tomy, were caught in a ferocious storm. This led to both of them losing their masts after their boats were rolled upside down. According to Gregor: “The whole boat got thrown sideways, everything went dark and I was lying on the roof and stuff lying everywhere”. Undaunted, he put together a jury rig and set out to rescue the badly injured Tomy.

In his illustrated presentation, Gregor will tell the story of the race up to that point and the dramatic multi-national rescue that was to follow.