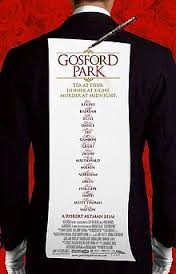 A Film by Robert Altman

Gosford Park (2001),  is a film set in the 1930’s based in an old-fashioned country house where a weekend hunting party is about to commence. The only problem is where the line of the hunter and the hunted stand. A mysterious murder ensues and the investigation is underway.

Be sure to Book in if you wish to come along