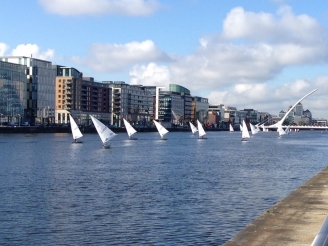 Who will be the Royal Alfred Yacht Club King of the River 2015?

This year’s edition takes place on Saturday, October 3rd.  Last year, Radial Youth Champion Conor O’Beirne switched into a Full rig and beat all-comers, edging former top ranked Full rig sailor and recent RS400 Southerns’ winner Paul MacMahon into 2nd.  Eighteen Lasers raced between the East Link Toll Bridge and the Samuel Beckett Bridge on a lovely Autumn day.  O’Beirne took away a famous old trophy with a great pedigree from previous Liffey events for Sportsboats – 1720s and after that SB3s (as they were called back then).  With good local turnouts in Laser Full rigs all Summer on Dublin Bay and an open invite to 4.7s and Radials to come along (with a separate start on offer) we hope to exceed that number this year.  It’s also a great way for Laser sailors from Dun Laoghaire, Howth or wherever to warm up for the various Frostbite series.

RAYC Commodore Barry MacNeaney will again be RO and is known for starting races quickly to keep things on the go. There’ll be as many races as possible before the Bridge lifts again at 16:00 hours! Launching is at the hosting Poolbeg Yacht Club with great spectating along the Quays or perhaps with a coffee or glass of wine on board the “Cill Airne” restaurant/bar ship.

Check out NOR and Online entry at: http://www.royalalfredtemp.com/