Short Lecture: The Sinking of The Endurance 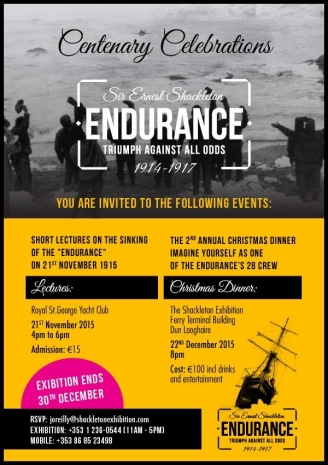 On the 21st November, the Club will be hosting a short lecture on the Sinking of the Endurance as part of the Shackleton Endurance Exhibition, which is open to the public until the 30th December.

A lecture will be given by Liam Maloney, in-house historian, on one of the most incredible survival stories in history: the sinking of the Endurance.

This event will take place at your Club between 4pm – 6pm. Admission €15. Book your place by contacting John O’Reilly at joreilly@shackletonexhibition.com or by calling the exhibition at 01 236 0644.

“As if the ship and its crew had not been plagued by enough of it already, heavy pack ice was again sighted, and hours later a blowing gale reared its ugly head. For two days, the Endurance took shelter under an unlikely aegis – dodging to and fro under the lee of a stranded iceberg. As the gale eased, the ship made crawling headway towards her Antarctic destination, now just one day’s sail distant. On encountering the ice pack once more, Shackleton opted to work through it, but with temperatures plummeting, there would be no escape from its icy squeeze.”