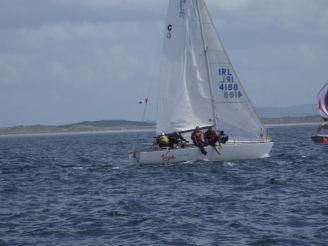 Whether your style is weeknight beer-can racing or competing on the world stage – the J/24 is undeniably the most popular racing keelboat to make waves around the world. This appealing keelboat started with one man’s desire for a sailboat to accommodate his family and to be a competitive racer. Twenty-seven years later, the J/24 has become a legend. A stable sailboat for family togetherness, the J/24 has also been the competitive launch pad for the careers of numerous America’s Cup professionals.

While some of the world's best sailors have the latest version J/24, a well-prepared 1977 model, built to the same shape and weight with rigid end-grained balsa core construction can still win the J/24 Class world championship even after 30,000+ miles of trailering. That's "One Design" racing! The International J/24 is presently built in the U.S., Argentina and Italy and has more than 50,000 people sailing 5,200 boats in 27countries.