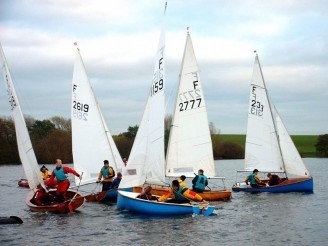 The Schull Alumni team showed themselves to be the ‘in form’ team, confirming their ITRA Irish Champion status.

The ISAF Team Racing World Championship is the ultimate test of the three boat versus three boat format. The Irish Team Racing Association ran trials on 14th February to select the Irish representatives. The event was sailed in light airs within Dun Laoghaire Harbour with five teams competing in the double round robin. Royal St George Yacht Club’s excellent Fireflies provided the ideal platform, as identical boats will be used in the Worlds on Rutland Water, UK.

In the first match, Alumni were drawn against rivals George Knights as youth and speed took on the experience and cunning of the Knights. It was cut and thrust from the warning signal with no quarter asked for or given. The umpires were kept busy answering protests. Schull got the upper hand and retained control sailing faster to take the first match in the rubber. The second match saw the George Knights start strongly but were reeled in by Schull’s superior speed. It was all to play for down the run but Knights held onto the lead with a 1,4-5. Mark 4 saw 4 boats frenetically tacking and gybing as Schull tried to get into a winning combination. The George held the combination with last place swapping between the teams but a misjudgement by Knights on the finish line saw Schull sneak the win. The George didn’t drop another match (6 wins) and Schull (7 wins) fell only to Aidan McLaverty’s Hoop Dream, who took third place with 4 wins.

Thanks to Gordon Davies for organising the event, the RStGYC for providing the facilities and the race and umpire teams for supporting an enjoyable event.