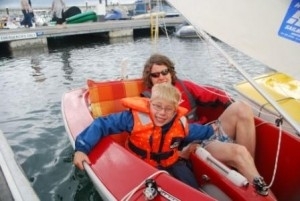 Dun Laoghaire Access sailing has changed its name to Sailability Dun Laoghaire in line with the ISA decision to rename the national body Sailability Ireland. This coincides with the linkup with Sailability in the North so that sailing for disabled people is now organised on a truly countrywide basis.

In Dun Laoghaire, a very full programme is planned for the coming season. An Introductory Day will be held in June, Sunday Sailing will start in mid-June to continue until the end of August and 2 week long courses will take place in June and August.

Over 35 children took part in the courses in Dun Laoghaire last year and with popularity growing we anticipate the same or higher numbers participating this year. We cater for children aged 8-17 with physical and sensorial disability.

As always this programme would not happen without the very generous support of the 4 waterfront clubs, the noble band of volunteers that turn up every week and the instructors who are an essential element of each course and who are really great with the children.
Sunday morning sailing will again be run at the club from 14th June till 16th August with the help of the DMYC. We are always looking for help so please contact (Ian French ianafrench@eircom.net) if you would like to get involved.

This year the President’s Cup will be hosted by the RIYC in late August. The event, founded by John Twomey, was inaugurated last year in Kinsale. Each of the 4 provinces fields 4 crews sailing in each of 4 different types of boat – Hansa 303, Squib, 2.4m and Skuds. Teams will participate, this year, from Dun Laoghaire, Kinsale, Galway and Carrickfergus.
The Hansa National Regatta will be held in Carrickfergus during the August weekend and we hope a full complement of 6 boats will take part from Dun Laoghaire.