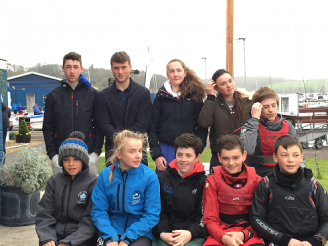 The RSGYC had a hugely successful showing at the ISA Youth National Championships 9th to 12th April in RCYC with a large team of George sailors representing the club in 420s, Laser radial and 4.7 classes and Optimist fleets.

There were four days of intense competition with conditions varying from light and shifty to squalls of 25 knots and as always in Cork Harbour, challenging tides. For George sailors however this just allowed them to put all the hard training hours done over the winter into practice and boy, did it pay off. Many congratulations to all the club’s sailors who took part.

Congratulations to all Dun Laoghaire Winners!

EVENT REPORT AND PHOTOS FROM OUR FRIENDS AT AFLOAT.IE