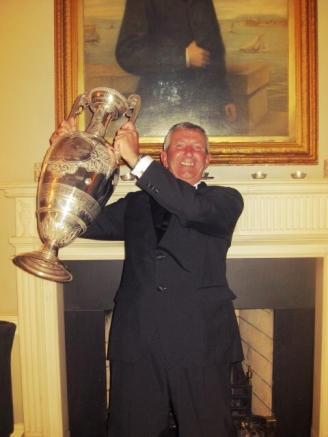 The Royal St. George hosted its principal annual event, the George’s Day Dinner & Awards on Saturday, 25th April 2015. As part of the evening’s proceedings, Commodore Justin McKenna awarded the Jameson Trophy, the Club’s premier trophy which is presented for outstanding contribution; this year’s recipient was Member Robin Sykes. It was a night to remember and a fitting celebration of the great accomplishments of our Members.

Our Vice-Commodore, Michael Pomeroy, George’s Day Speech from the evening is available for your perusal.

The award categories were as follows:

Youth Trophy (Significant Contribution to the Club by a Youth Sailor)

The Jameson Trophy was awarded to Robin Sykes.

Pictures from the night are available in the following George’s Day Gallery.