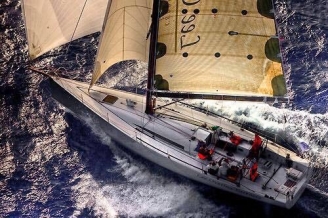 The Race 3 of the ISORA Avery Crest Offshore Series was very special as it was the first time that an ISORA Race was to be recorded using Yellow Brick (YB) satellite trackers. This huge step for ISORA was facilitated by the generous sponsorship of “Avery Crest Ski Chalets Meribel”. Avery Crest provides luxury quality ski chalets in the best ski resorts in Europe.

Their sponsorship allowed ISORA to acquire YB trackers to be used in all their races in the future. The use of the trackers brings the challenges and progress of offshore racing “right into your sitting room”. In the past the fleet headed off from the start line and disappeared over the horizon, out of sight and unfortunately, out of mind. Now with the superb quality product, YB Trackers, all the boats taking part can be tracked and their progress followed by those left behind. As part of this leading tracking system, people can now download the YB Tracking app and buy the entire ISORA 2015 series of races for €2.99. All races can be replayed and analysed after the race in the comfort of your own home.

Of the 18 entries for the race, 17 came to the start line where NYC Commodore, Larry Power, sent the fleet off direct towards Holyhead at 08.05. The weather forecast for the race was not good since the beginning of the week. Earlier in the week the race promised to be run with very strong winds. However, as the week developed, a window of opportunity opened in the forecast to allow nearly perfect conditions for the race. This window was to close by early Sunday morning when again strong southerly winds were expected on the Irish Sea. With this limited window of opportunity available, the Sailing Committee decided to shorten the course to go direct to Holyhead.

At the start, the winds were North westerly 10-12 knots. The forecast showed that a hole of “no wind” would develop close to the Irish coast by mid-day and it was vital that the fleet made progress away from the land immediately after the start. The fleet, lead by the Adrian Lee’s Cookson 50 “Lee Overlay”, sped under spinnaker out of the bay towards Holyhead. With the tide turning north just after the start, the fleet were pushed north.

Soon into the race, there was little sign of the “hole” appearing and the fleet sped towards Holyhead with an ETA of 15.30 for most of the fleet. In the fleet there were five J109s. “Jedi”, now sailed two-handed got into some spinnaker hoist difficulties are the start and fell to the rear of the fleet. “Wakey Wakey” also had problems at the start and also fell towards the rear. The remaining three J109s, “Ruth”, “Mojito” and “Sgrech” commenced a battle for position that went on for nearly five hours with less than a boat length between the three.

Then the “Hole” arrived!! The fleet slowed down to a near halt. This was made worse by the significant “lop” on the sea, making progress very difficult. “Lee Overlay” who sped away from the fleet after the start, appeared to have sailed very north and probably around the hole. They make cracking progress sailing a most northerly course until due north of the Skerries. There they gybed into a strong foul tide but heading for the finish line in Holyhead.

The remainder of the fleet were caught in the “hole” and all progress stopped for approximately two hours. Two handed “Bam” and J109, “Ruth”, were first to break and head off at speed towards Holyhead followed eventually by the fleet.

On the approach to Holyhead, many of the fleet underestimated the strength of the south going tide cross the mouth of the harbour and, while only slightly below the course to the end of the breakwater, got trapped in the tide and made very little progress toward the end of the pier end. This “faux pas” allowed the main fleet to regain contact with the leading part of the fleet.

“Lee Overlay” had an easy passage, crossing the finish line at Holyhead at 14.26 and turned on the line to head back to Dun Laoghaire. The next boat to arrive was “Bam” at 17.00. The last boat to cross the finish Line, manned by Dawn Russell of Holyhead sailing Club, was “Lady Rowena” at 19.33. At this stage “Lee Overlay” had nearly arrived back to its berth in Dun Laoghaire marina.

Adrian Lee’s “ Lee Overlay” took an easy overall and Class 1 win on his first cross channel in ISORA since his return to racing in the Irish Sea. David Simpson’s Swan “Albireo” took Class 2 and Silver Class. The downwind racing did not suit the J’s with “Ruth” taking 3rd place overall behind “Bam”.

The next two races involve a weekend of offshore racing with a race from Holyhead to Douglas on Friday evening, 22nd May, followed by a second race starting early Sunday morning 23rd May from Douglas to Dun Laoghaire.

These races can be followed by downloading the YB tracking app or on the tracker viewer on the ISORA website http://www.isora.org . These are exciting times for ISORA. The use of the YB trackers is a critical cog in the progress and development of offshore racing in these water.