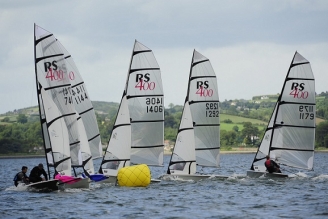 Please see below the event write up from last weekend’s RS Northern Championships which were held on Carlingford Lough. The George contingent did well in the RS400 and particularly well in the RS Feva’s.

Carlingford the scene of epic battles all weekend

Hastings pulls off first ever perfect 360 at Carlingford RS400 Northerns.  It was a case of perpetual disorientation, but also a high point for Hastings, one of the fleets main movers and supporters, as he judged the spiralling wind, or Carlingford Kettle, to perfection. As those around him thrashed around helplessly, Hastings bore off in a smooth arc, with crew Neil Calvin maintaining perfect kite trim, and scribed a perfect circle, with no adjustments to sheeting angle, truly an incredible sight for all to witness. As the mini tornados spun their way across the lough, availing of the unique local topography, many others did the more traditional 360 rotation, with the rig passing under the boat, and so it came to pass that we had a very odd days racing on Saturday. With a similar South Westerly breeze forecast for the Sunday, many went to bed worried about another day of randomness.
The writing was on the wall for Saturday, as we started the briefing in 20 knots of South Easterly, and finished in 20 knots of South Westerly 10 minutes later. Most relevant question was probably “how deep is it out there?”
Other relevant questions were, “is it safe to pitch a tent here, or should we sleep under the car?”, and “are you trying to take my helm out?” (This seemed to be the general plan for many on Saturday night, which was a long and noisy evening, with some top quality Guinness, or Buckfast depending on how old you are). Another question was “what comes after 2, is it 3, or 4?”. This was obviously a difficult question for many, as in race two, several boats stopped after three laps, and were accused of doing only two, whilst the majority did three, but were accused of doing four…..confusing indeed, and probably a reflection of a long day spent chasing numbers around the compass rose.

The weekend saw the welcome return to battle of 2013 Circuit kings, Dr Bob “Bucky” Espey, and newly engaged Michael Gunning, finally making it back out after a few forays in the SB20 fleet. It was to be fascinating to see how they would fare against all conquering 2014 RS400 champion, Alex Barry of Monkstown, fresh from his win the 1720 Irish Nationals. As seems to be the case from event to event, the calibre of the RS400 fleet becomes ever more stellar, and there cannot have been many more talent loaded one design fleet racing in Ireland, with most of the top 10 being National Champions in many classes, along with resident World top ten 49er and Irish Olympian, Ryan Seaton helming Pretty Boy’s boat in the absence of Chunky Ferguson. Figaro competitor and 2013 Irish Sailor of the Year Dave Kenefick, kicked off proceedings with an impressive bullet and looked like he had got himself dialled in quickly in his new boat, but the standard of those around him was quickly evident and he was to have a tough time thereafter, eventually finishing 10th overall.
Diane Kissane from Howth was another new face to the fleet, borrowing the RNIYC try-it-out boat #510. Typically for the forward thinking RS400 fleet, these RNIYC enthusiasts bought this old boat for about £1500, on EBay I believe, and it has been given the Uncle Liam tender loving care refurb. Diana with crew Finbar Bradley gave the fleet the big thumbs up, and after finishing 13th out of the 31 boat fleet, plan to hit the circuit next year in their own boat, adding yet another National Champion to the list, Diana having been double Irish Optimist Champion in 2005 and 2006.
After a lot of difficult and competitive sailing, going into the final race, there were just three points separating the top 3 of Bob Espey and Micheal Gunning in first from Chris Penny and Simon Martin in second and third placed David Rose and Ian Heffernan, who had won the first race on day two.  Just seven points separated first to sixth.    This is a clear indication of the quality that we now have throughout the 400 fleet.

Last year the Southern teams were starting to quickly overhaul the established Northern dominance of Espey and Gareth Flannigan, and whilst Flannigan had a mixed event and was to succumb to gear failure after a 2nd place in the Sunday morning opener, the top two slots were to go to the brilliant Espey followed by Olympian Ryan Seaton and Philip Adams, with Ex 400 Irish Champs Emmet and James Ryan two points clear of Rose and Heffernan in third and fourth.  Chris and Simon had to settle for fifth.
Other notable performances were from Paul McLaughlin and Mick McKinley in 9th, and a strong showing from George Kingston and Ian McNamee in 7th, taking a split decision over the highly talented, but well past sell by date pairing of DrC and Stevie Kane, who shocked themselves by posting the best total over three races on Sunday (only getting this mention as I am writing the report obviously). Alex Barry, sailing this time with Andrew Lane finished an unaccustomed 6th after being joint leaders overnight.
Other big improvers were Brian Holmes sailing with a completely new crew, progressing nicely and representing the Scorpion fleet of yore, and Peter Bayley getting well in the mix. Sadly, our eldest statesman Liam Donnelly, succumbed to a Mountain Biking injury, and a punctured lung, and wasn’t able to race on Sunday, but will no doubt be back to full fighting form for the next one.
So things go from strength to strength in the 400s, with an amazing 31 boats for a regional, and one can only imagine a record turnout for the Irish Nationals 18-20 September at Ballyholme, with about 10 extra teams expected from the UK fleet in what should be the hardest fought of any Irish Championships in 2015.

In the RS200 fleet, Greystones SC pairing of Aaron Jones and Conor Cleary dominated from the off scoring five straight race wins which allowed them to sit out the final race and be first boat ashore. Ensuring that Jones and Cleary were kept on their toes for the weekend was Meg Tyrell and Katie Noonan from the Royal Irish/Greystones. They scored five 2nd places and a well-deserved win in the final race.  In third place was Ciaran & Siobhan Keogh with a great showing representing the newly emerging Cullaun Sailing Club RS fleet.

The RS Feva fleet enjoyed a competitive event with three different race winners all hailing from Dun Laoghaire. The top three boats showed great consistency in spite of the shifty conditions, with none of them scoring worse than a 3rd placing. Coming out on top was Toby Hudson Fowler and Greg Arrowsmith who grew in confidence as the weekend progressed winning the final four races. In second was a very impressive display by Triona Hinkson and Kathy Kelly who managed to hold off the challenge of Clare Gorman and Sarah Fogarty in third.