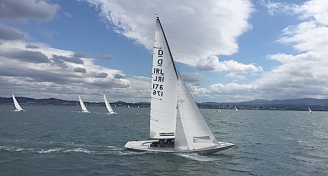 The team who took an early lead on Friday afternoon were challenged first by Salcombe entry, Bear, skippered by Martin Payne.

Another challenge in the 13–boat fleet emerged yesterday from Kinsale’s Little Fella (Cameron Good) but in the end no one could match Phantom’s blistering pace downwind that gave the Royal St. George crew a 100–metre lead in Sunday’s final race seven.

By adding two race wins to the final scoresheet tally, Hegarty, Williams and Bowring took the title by a margin of five points from Payne. Last year the Phantom crew finished second to Lawrie Smith in a 21–boat fleet in Kinsale.

Royal St. George club mate Andrew Craig sailing Chimaera was one point further back in third overall. Racing was run under the NYC’s Race Officer Con Murphy and his team.

Thank you to Afloat.ie for this report and photo.