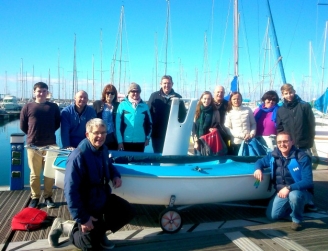 On the 26th June, four cruisers from Lough Foyle will set off from Greencastle Donegal on a round trip passage of Ireland stopping at each Sailability Club around the coastline of Ireland.

This is to promote Sailability – sailing for disabled people in Ireland. Sailability Ireland is the new name for the Irish Disabled Sailing Association (IDSA) which was established in 1980 to introduce and encourage people of all ages with disabilities to take up sailing. Thirty years later, Sailability Ireland members are involved in all levels of the sport, from regular club racing, through international championship, to Paralympic Campaigns.

The cruisers will arrive in Dun Laoghaire for the day on Monday 29th June where they will be hosted by the Royal St George Yacht Club and Dun Laoghaire Sailability. D/L Sailability run a very successful programme of courses for disabled children throughout the Summer. 35-40 children are involved in the sailing thanks to the support of the four waterfront clubs: the Royal St. George, the National, the Royal Irish, and the DMYC, as well as their instructors and volunteers.

To mark the occasion Sailability sailors from Dun Laoghaire will meet the Lough Foyle Crews for a BBQ at the Royal St. George and then head off in local cruisers at 6pm and accompany the Lough Foyle as far as Dalkey Island or perhaps Killiney Bay as they head towards the next port of call Kinsale.

Sailing for disabled people in Ireland has blossomed over the last few years and there are now centres in all provinces in Ireland. In Dun Laoghaire, the programme started 6 years ago and has grown every year to the extent that all of the events this season are full, from the regular Sunday morning sailing to the week courses in  June and August .

This year the Royal Irish are hosting the Presidents Cup an all-Ireland competition for disabled sailors with a team from each Province competing in 4 different types of boats. the event will be held in Dun Laoghaire harbour on 22nd and 23rd August