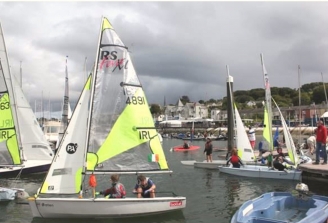 Most competitors arrived Thursday night to set up camp in a somewhat stony car park known locally as the Peg-End, which lived up to its name admirably.  There were rumours that this early arrival was to facilitate a few non-sailing parents to secretly compete in the nearby Irish Red Head Competition, otherwise known as Fox Oxygen.

After a slow start on Friday morning, the Nationals had begun and very eventful they were too, not to mention the sailing.  Being our first time at RCYC, the first thing we noticed was that the race area was like a 2-day beat away from the launch area in Crosshaven. Joking aside, Friday brought in about 20 knots of breeze. It still took us over an hour to get out to Cuskinny bay to start the first race.  Conditions suited heavier sailors and the RStGYC filled all 3 podium positions at end of the 1st day with Alex and Henry Start leading the pack with a slim 1 point lead over Triona Hinkson and Kathy Kelly who, in turn, were just ahead of Grace and Helen O’Beirne. Needless to say, there was much merrymaking that night around the club campfires.  Saturday morning brought in light SW winds and most Fevas were towed to the race course, proper service that was, well done RCYC! The wind picked up to a sailable breeze later in the afternoon and Triona and Kathy slipped into 1st place with a two point lead.  NYC Dara Donnely and Cliona Coyle flew into second place after a string of first places.  Alex and Henry (still not related to the authors) were left shocked and stunned in third.  It was all left to play for on Sunday, and every race changed the positions, jib-sheet biting stuff it was.  Forecasts were for more light on winds; it was time for the boys to concoct a cunning plan. The resulting black flag sealed the deal. NYC took immediate advantage.  Final results were Dara and Cliona in first, Alex and Henry in second and just one point behind them Triona and Kathy in third.  Only a few places later, there was a solid performance notched up by Ellen Murray and Tara Coakley followed by a valiant effort later from Lizzie Montgonery and Lauren Murphy, not forgetting to mention the promising Emily Arrowsmith and Ciara Little.

Overall it was a fantastic series of races and great results for all the Dun Laoghaire boats taking home 1st, 2nd, and 3rd between them from an away Nationals in Cork’s backyard.

A big thanks to Stephen Craig for coaching the RS Feva fleet run-up to the event, and we can’t forget to mention his own RS 200 3rd place award with Sarah Cooney in the highly competitive RS 200 Nationals and Euro Cup event.  Saving the best news till last, Marty O’Leary and Rachel Williamson sailed away with the coveted 1st place prize for the RStGYC in this event.

Finally, thanks to the RCYC for hosting the competition and a special thanks to Elaine Malcolm for building up the RStGYC fleet to the necessary Feva-pitch (sorry), organising the coaching, and encouraging everyone to get out sailing.