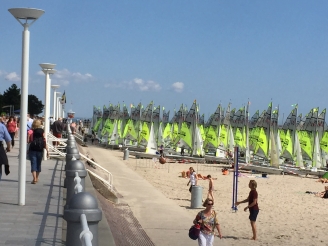 What began as a vague possibility was turned into a great experience this summer. Yes – the RS Feva Worlds 2015.

With relatively low Irish turnouts the past few years, it seemed unlikely that this year would be any different. Yet during winter training, the sailors decided to make it our goal and, after some persuasion, the trip got the go ahead from our parents.

From there, the journey started gathering momentum. It was tough to get enough numbers out during winter and spring training to make it worthwhile, yet over the course of the winter, we improved considerably under the tutelage of Colin O’Mahony. A good showing at the Leinsters in April encouraged a few more to consider a trip to Germany for the Worlds. Shortly after this though, Colin’s departure for the US left us without a coach. We managed to recruit Tadgh Donnelly and from there the training picked up a gear.

We had several training camps in June, which exposed us to a new level of professionalism and training. These camps were punctuated with a trip to Carlingford for the RS Ulsters, a great learning experience even if the turnout wasn’t so good. Then we were into the final stretch and before we knew it we were in Germany for a couple of days training before the event. In total 5 boats from Ireland went to the worlds – Toby Hudson Fowler and greg Arrowsmith, Triona Hinkson and Kathy Kelly, Rachel Eggers and Helen O’Beirne, Alex and Henry Start (all from the RSGYC) and Dara Donnelly and Cliona Coyle (NYC).

I don’t think I’ll ever see any International event quite like a Feva Worlds. The friendly and easygoing manner onshore contrasted brilliantly with the efficiency of the race committee on the water. We began with the qualifying series; two days of racing which would decide which fleet you would be allocated into – Gold, Silver or Bronze. A light first day and a windy second gave a good picture of the standard and ranking of the sailors. There were mixed emotions in the Irish camp after the fleets were allocated.

Everyone was then facing a fresh start with the new fleets, with our points effectively wiped. Wednesday was a frustrating day for many sailors, with some learning many hard lessons while others got valuable experience in leading fleets. The wind was shifty and changeable over the next few days, and racing was postponed many times. Gradually the Irish found their footing and everyone punched in at least one good result. One of the highlights had to be the five-a-side football tournament where the mixed Team IRL were cheated out of a semi-final spot after impressive and skilful displays against Britain and Estonia!

On the final day of racing, we had Helen O’Beirne and Rachel Eggers pushing for a podium position in Bronze fleet and everyone had one last opportunity to improve their standing. After much waiting around onshore for the breeze to fill in, we were able to get racing. Bright sunshine and 15 knots of breeze – champagne sailing! Good races across the board were topped off by Toby and Greg’s 8th in Gold, Helen and Rachel’s 1st in Bronze and the Start’s almost 4th in Silver, were it not for a black flag.

For many of us, it was our first international events, and I doubt we’ll ever enjoy one as much. Everybody was incredibly friendly, both on and off the water and it was an easygoing and smoothly run event. I can’t recommend it enough to anyone thinking of going in future years. The promise of Santander next year and Rhode Island, New York the following year is enough to make any budding Feva sailor go into training. And I hope they can have as much craic and good sailing as we had.

A final thank you must go to Ronan Adams for helping arrange our training, Elaine Malcolm for reviving the class, Tadgh Donnelly for his great work coaching us, all of our parents for everything and finally Niamh Hinkson for being everyone’s mum!