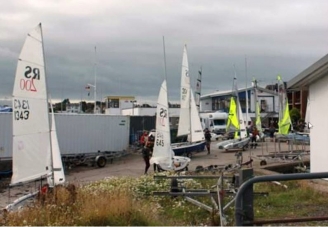 It was a whole 3 weeks since Team-Feva at the George had attended a competition and the sailors were getting unsettled.

Helms were seen frantically looking for wind shifts in the middle of the M50. Crews were getting detention on a daily basis for spraying McLube on anything that moved. It was time indeed to get out the road trailers once again. Luckily there was one last event of the season left – the Northerns – way up in the land of Norn-Iorn.  Four eager Fevas from the George set forth.

The Ballyholme RO, however, forgot to post the SIs to the wind manager so there was no wind on Saturday. This, however, meant there was ample time to savor every point of the Irish 50-7 victory over Canada, not to mention upset caused by Japan.  Sunday morning brought radiant sun over the Bangor shores, but more importantly, it delivered a solid 10+ knots from somewhere down south… the speculation being it was some hot-air over Cork.  Preparations for the Dublin-Kerry All Ireland were underway, but that could wait. 1st gun was at 10:30 and there was a tight schedule of four races to squeeze in.

Henry Higgins and Harry Durkin put their stamp on the 1st race with a solid win only to be forced to retire in the 2nd race as multiple bolts came adrift from their rudder bracket. Despite valiant efforts, there was no quick fix to be had.  Race 2 brought a welcome win for the recent National Champions, Dara Donnelly and Cliona Coyle from the NYC.  Race 3 really upset the apple cart with all the Dublin boats getting the dreaded OCS.

This changed the landscape completely, the Trojan work put in by Triona Hinkson and Katerine Kelly, who were battling it out with Ellen Murray and Tara Coakley for 2nd and 3rd places, were unceremoniously cut short as two Strangford Lough YC boats jumped into those podium positions.  All was not lost for Team-Feva at the Royal St George YC as Alex and Henry Start (related to the authors) managed to sail away with 1st prize, despite their own set of equipment failures.  It was a particularly joyous occasion for them being their first sailing trophy since turning pro less than 12 months ago. Despite setbacks in the Northern races, Triona and Kathy were delighted to have won the coveted Feva Traveller trophy, reflecting a host of great results for them over the season as a whole.

A big thanks to Ballyholme Yacht club who ran a very slick operation, we forgive you for the wind no-show on Saturday.

Finally, we have to mention the stellar performance by Greg Arrowsmith and Toby Hudson-Fowler in the highly-competitive RS200 competition coming is a very respectable 4th.