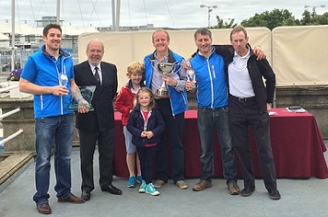 Race 1 was won by the returning SB20 veterans in Martin Reilly Motors (Colin Galavan / Chris Arrowsmith / Rory Byrne), beating the top ranked SB of the 2014 season Corona Extra (Graham Grant / Ronan Dowling / Katy Kelly) into second place, with the crew of Sharkbait (Darren Martin / Simon Murray / Roger Parnell) coming in third. After the first race it was apparent that it was a ’streaky’ Dublin bay day, with localised pockets of breeze enabling the most alert crews to climb up the leaderboard.

Race 2 was won by former Olympian Peter Kennedy with Stevie Kane and Emmet Ryan aboard Ridgefence. The eventual champions on Sin Bin came in 2nd, with Espey 3 – a boat containing no fewer than 2 Olympians on board (Rob Espey / James Espey /Steve Milne) crossing the line into 3rd.

Race 3 concluded the day with Espey 3 climbing up to 1st place, local boat Animal Origami (Marty O’ Leary / Chris Chapman / Neil O’Hagan) scoring 2nd in their first event together and Ridgefence following up in 3rd. Some very tired crews sailed back in for light refreshments and craic in the RIYC. Things were tight at the top with Espey 3 and Sin Bin both on 12 points, so there was plenty to discuss!

Weather conditions on day 2 were lighter than the previous day but there was still just enough wind to get boats planing downwind and make the racing exciting. However, the flooding tide was to make starting conditions challenging for the fleet and the ever patient race management team in the Northerly breeze, with the latter tasked with running 4 back-to-back races on the day.

The crew of Espey 3 put the pressure on early, winning Race 4 from the reigning 2014 national champions on board Bad/Kilcullen (Stephan Hyde / Jerry Dowling /Jimmy Dowling) in 2nd and with Lia (Dave Barry / John Malone / Bob Allen) coming in 3rd. Race 5 was a local affair at the very top, won by RIYC boat Venuesworld.com (Ger Dempsey/Chris Nolan/Blair Stanway/Graham Barker) who lead from the start over 2nd place Bango (James Gorman / Ted Laverty / Keith Staunton) with Ridgefence coming in 3rd. Race 6 was then won by the crew of Sharkbait, with Sin Bin re-establishing their credentials with a fine 2nd place and the crew of Espey 3 maintaining their claim for the championship with a hard fought 3rd place. The final race of the day was won once again by Sharkbait – who were now worrying some the event favourites – with Venuesworld.com nailing 2nd and Ruby Blue (Aidan O’Connell / Kieran Dorgan / Ben O’Donoghue ) following closely in 3rd.

A long day and a deserved evening of relaxation (after the formality of the class AGM, but more on that at a later date) with a sit-down dinner in the RIYC. The dinner was extremely well attended, with a few bottles of wine consumed along with some great craic. The class is fast gaining a reputation for its competitiveness on the water and the warmth of its apres-sailing to one and all.

The final day. 2 races and places up for grabs. With just a couple of points separating the 2 leaders – Sin Bin and Espey 3 – nothing could be taken for granted. The forecast was for extremely light conditions and it didn’t disappoint with Jack Roy working hard to get the full quota of races in.

Race 8 saw the fleet split evenly on the downwind leg, with the wind filling in from the left side of the course leaving anyone on the right-hand side floundering. Sin Bin, who had proven to be highly consistent all event, came out trumps on this leg with Espey 3 having chosen the wrong side. Sin Bin never lost the lead and won the race handsomely with Espey 3 coming in 4th. Bad/Kilcullen crossed in 2nd, with Animal Origami in 3rd.
The final race, and Sin Bins’ to lose. You already know they didn’t! Sharkbait topped off a strong second half to their event with another race win, with Ridgefence claiming 2nd and the new class presidents boat Seriously Bonkers x 3 ( Martin Cuppage/ Peter Lee (President)/Rory Groves) coming in 3rd.

The crew of Sin Bin won from Espey 3 by 4 points in the end, with the crew of Ruby Blue climbing up to 3rd place on the back of highly consistent scoring after an OCS in race 1.

All in all a fantastic event, expertly run by Jack Roy and team, in a superb venue in the RIYC. The new SB20 Association Committee have a lot to live up to. A word also to our event sponsors – Dubarry, Venuesworld.com and Dinghy Supplies whose continued support was greatly appreciated.