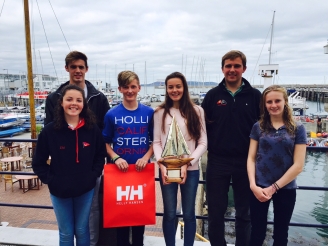 The club had three teams competing RSGYC RED, RSGYC BLUE and RSGYC GREEN. In preparation for the event, the teams had been training on Wednesday nights in August to get familiar with Fireflies and with Team Racing.

Overall, 8 teams of under 18 sailors took part, quickly getting to grips with the equally matched fleet of firefly dinghies.  Blue skies and fresh breezes on Saturday saw Storm sails fitted as the teams got into their strides.

The first race of the competition saw RSGYC RED defeat West Kirby with a 1,3,6 combination.  Given that the core of this West Kirby team had finished second Youth team at the Team Race Worlds in July this was a fantastic achievement.  It was an early indication of the promise of the club entries and demonstrated the benefits of the coaching.

The experienced and fast team from Schull set the early pace and dominated the first round robin where each team sailed 7 races. Joining Schull in the Top four and thus into the Gold League were West Kirby and RSGYC GREEN and RSGYC RED.

Sunday morning saw gentle breezes and the weather co-operated all day and allowing a second round of Gold and Silver racing to be completed. Incredibly RSGYC Green won a three-way tie to finish as top seeds for the Semi Final knock-outs.  RSGYC RED and RSGYC Blue battled it out for the fourth seed with RSGYC RED emerging victorious.

The first Semi Finals saw West Kirby eliminate Schull 2-0 and RSGYC Green knocking out RSGYC RED by the same score.  So for Team Racing traditionalists we had a classic final; West Kirby against RSGYC (Green).   It was closely fought with WKSC taking the first race only for RSGYC Green to stack the favoured pin in Race 2 and use their speed to sail off with a 1-2 victory having led at mark one with a 1,2,3.  West Kirby showed their experience in the deciding race by dominating the pre-start and establishing a 1-2  combination at the first mark which they would never relinquish.  Schull went back to West Cork with the consolation of third place after winning the petit final 2-0.

All through the event, the club teams improved.  It is clear that there is huge potential with these sailors and the next generation of club Team Racers could be some of the best yet.