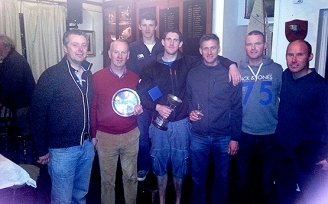 The end of the Irish Fireball Regatta Season came to a rather damp end when a reduced fleet took to the water after today’s rugby and the dry weather of recent days gave way to drizzle and then rain.

Defending champions and overnight leaders didn’t have to sail the last race and they didn’t! The host club’s two entries didn’t make it either nor did two other visitors – from Killaloe and further west. McCartin & Kinsella couldn’t lose so they were literally “in the pound seats”.

This opened the door for Butler & Oram to close the gap, but they left it late to secure the race win. Niall McGrotty & Neil Cramer initially led the final race quite comfortably, but they were progressively reeled in by Butler and Oram before yielding the lead just before the last windward mark. These two had a significant lead over the rest of the fleet who were led home by Creighton & O’Reilly. Team Clancy, Conor & James have acquired more fourth places than anyone and so another one appeared on the last race of the year.

Grattan Donnelly & Ed Butler (14713) kept the range of their results tight – an eighth their best, two tenths their worst. This would be enough to give them the Silver Fleet prize.

Clontarf Yacht & Boat Club hosted the event at short notice and did a very good job of it, working the racing around the rugby today and getting four races in yesterday.

Article and image courtesy of Cormac Bradley at afloat.ie