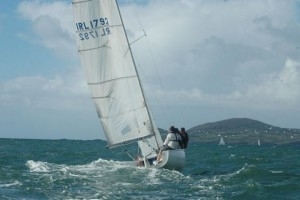 First race and it was a day of two halves on Sunday.

When we arrived at the Club, you couldn’t get out of the car because of the driving sleet and what looked like snow to me. That passed, driven away by even colder, gusty winds from the same direction as the Arctic.

Of course, in all efficiency, Ronan had the 1720 fleet in the water with a little further encouragement. We trooped out to the pontoon and stood around looking glum, comparing thermal brands. A couple of cruisers in the middle of the harbour fully reefed and were going sideways. It was now blowing stink. We decided to ‘stand down’ but… before you could say, ‘Mine’s a skinny flat white’ or even get the rib to shore – the wind dropped and the sun appeared. Usail departed, so looking sheepish, we hopped in and pushed off.

We had a really nice sail in the sunshine with not too much wind, but a challenging sea from the east. Four rounds. All Stuart Walker and ‘playing the percentages’ we went around without using the Spinnaker while the macho teams behind hoisted for the spills and thrills of the roller coaster. Only on the last downwind leg, when defeat was imminent, did we put something up and actually it was easy enough to manage, and anyway, it’s in the Leinster colours (or Rothmans if you are retro chic).

And so, we held our lead across the line, although between our ever-improving performance and sending in a late entry, and us not going over to the National for drinks, our handicap must be way up off the Richter Scale by now.