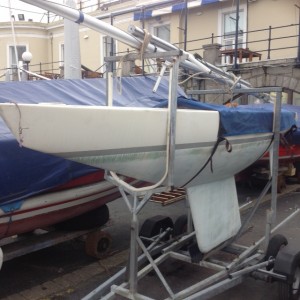 Two 2.4m boats, which were purchased by the Club second-hand from Scotland, arrived on the forecourt this week. They will provide a much-needed boost to our Sailability sailors who are anxious to progress to a high-performance racing boat.

The George has for the last 6 years run the Sunday morning sailing, which is a pivotal part of the Dun Laoghaire Sailability programme for physically and sensorially disabled children aged between 8 and 17.

The venture has developed from a small start to a stage where upwards of 35 children are taking part. The children sail in 6 Hansa dinghies that are specifically designed for disabled sailing. At this stage, many of the children who first joined are developing their sailing and racing skills and there is the constant challenge to provide progression for them in terms of coaching for racing in more advanced boats.

The purchase by the Club of two 2.4 m single handed boats will go a long way to filling this need and the young sailors are excited about getting out and racing in them this season. The Dun Laoghaire Sailability Group, who coordinate the Programme between the four waterfront clubs, will provide coaching in the 2.4 s so that the Dun Laoghaire team will be in good shape to defend the title they won last year in the Presidents Cup.

I would like to thank the Club for their continued support and, in particular, the Special Olympics Fund who funded the purchase of the boats. I would also like to thank Tino Hyland for generously paying for the transport from Scotland and MGM for the offer of their hoist to lift them off.

I hope you will come down to the Club on Sunday mornings this season to see the boats in action.