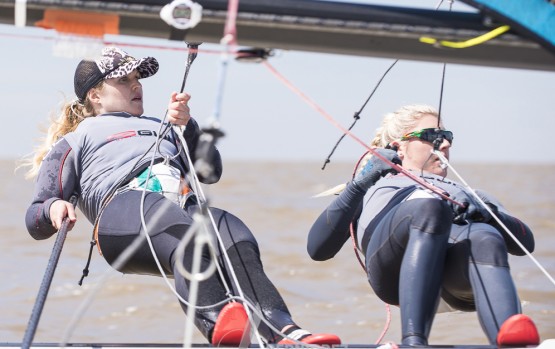 Ireland’s 49erFX pair won their Olympic place in Rio today after Algeria opted not to take up its place on the Olympic start line.

The Irish girls Andrea Brewster and Saskia Tidey were first in line for the African plan by virtue of their finishing position at the 2015 World Championships. It puts an end to an agonising wait for the Royal Irish duo after the prospect of an Algerian entry first raised its head a month ago. For more on the story click here.

Following a four month delay, World Sailing confirmed Brewster and Tidey’s qualification. The news that Africa would not enter the 49erFX skiff event released another European place and as the next in line based on the world championships in Argentina, Providence Team IRL’s Brewster and Tidey have secured qualification for Ireland.

The pair delivered a strong final day performance at the 2015 World Championships in Argentina and appeared to secure a berth when they finished 14th overall. However, a rules protest ashore meant they would have to compete for the final European place at the games in next week’s Princess Sofia Regatta in Mallorca.

Image and article courtesy of Afloat.ie