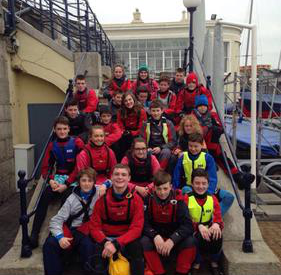 The Feva class had a really successful training clinic over the Easter holidays, with 26 sailors taking part over the 3 days.

Led by our National coach, Stephen Craig, assisted by Meg Tyrrell, we had great pleasure in welcoming sailors from Galway, Malahide, and Greystones as well as those from the RSGYC and NYC. It was great to see so many new faces coming into the class this year.

On Sunday, we started the day with some ice breakers and a rigging session, where everyone participated in rigging a Feva from scratch. We launched soon after and began with a warmup inside the harbour, before heading outside the harbour where we did upwind exercises with the focus on pointing and lane holding. Tacking on the whistle allowed us to coach each sailor individually from our RIBs as they sailed upwind. We followed by doing long downwind grinds with the focus on efficient hoists and drops.
Conditions were light to moderate.

On Monday conditions were lighter still, although in he morning we managed to get in some upwind training with a focus on roll tacking and boat balance, and I was happy with an improvement in both of these aspects. When the wind did drop to virtually 0 knots halfway through our session, we carried out games to keep the sailors entertained for the remainder of the water session.

On Tuesday, we started off with about 0-2 knots, and so we planned for a day with very little breeze. We launched and did some fun races and games, however halfway through our session the wind filled into about 7 knots and we managed to cover some upwind practice followed by downwind training. We put a focus on angles when sailing downwind and how to sail the best possible course. We then ended the day with a session on starts and how to find the bias, followed by races. When we returned ashore there was Pizza waiting for the sailors as a very welcome way to end the clinic.